As U.S. consumption of watermelons has steadily increased over time, imports have also increased to fulfill year-round consumer demand. On average 5.1 billion pounds were consumed in 2019, a 4-percent increase from 2010, but a 5-percent decline from 2016 when consumption reached its highest level in over a decade. 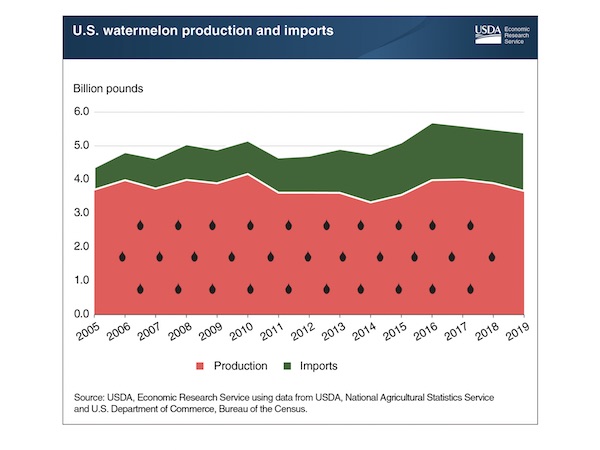 Watermelon produced domestically remains the main source of consumption in the United States, with production reaching 3.9 billion pounds in 2016, yet decreasing on average since 2010. Nearly 80 percent of all U.S. watermelon production hails from four States—Florida, Georgia, Texas and California. Florida surpasses all other States as the main supplier of U.S. watermelons, accounting for total production of 907 million pounds, or 25 percent of domestic supplies in 2019. Seedless varieties have become increasingly popular, and Florida’s seedless shipments from January to May 2019 rose nearly 20 percent compared to the same time period the previous year.

While total domestic production of watermelon has not risen, U.S. imports have. In 2019, imports reached a record high level of 1.7 billion pounds, making up roughly a third of all watermelons consumed. Mexico supplies on average 80 percent of U.S. watermelon imports annually, including higher shipments during the United States’ off-season in early spring. This chart is based on the Economic Research Service’s Fruit and Tree Nuts Outlook from March 2020.