The National Retail Report-Specialty Crops was released early, due to the observation of  Independence Day. Summer party favorites such as cherries, melons, peaches, nectarines, strawberries, sweet onions, asparagus, and salad were heavily promoted. 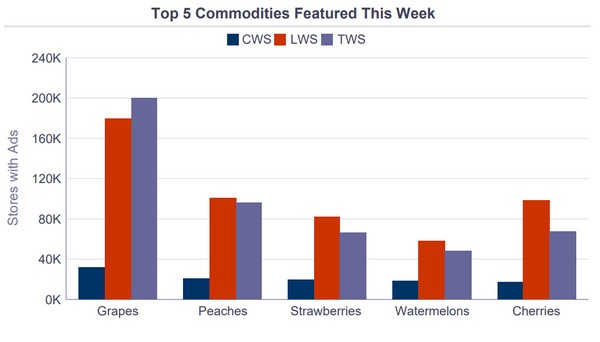 The following are the prices of major advertised items (3,000 plus stores) this week, compared to the same week last year. Significant increases in price for fruit this week included blackberries and mangos, both at 15%. Significant decreases included avocados at 38%, strawberries (2 lb at 24%, 1 lb organic at17%, 1 lb at 15%), black seedless grapes at 21%, and white nectarines at 12%. There were no significant changes for onions and potatoes this week. Significant increases in vegetable prices this week included corn at 57% and on-the-vine tomatoes at 18%. There were no significant decreases.