Not many Dutch companies get to hear, "It pleases His Majesty, King Willem Alexander, to award you the Royal predicate." But, that's exactly what happened at C. & H. Euser Beheer in Barendrecht. On Friday, 3 July, Lisette and Bas Euser received the Royal predicate from Jaap Smit. Smit is the King's Commissioner in South Holland. This is a true milestone for the family business. It celebrated its 100th-anniversary last year. It did so in style with staff, clients, and business partners last year. 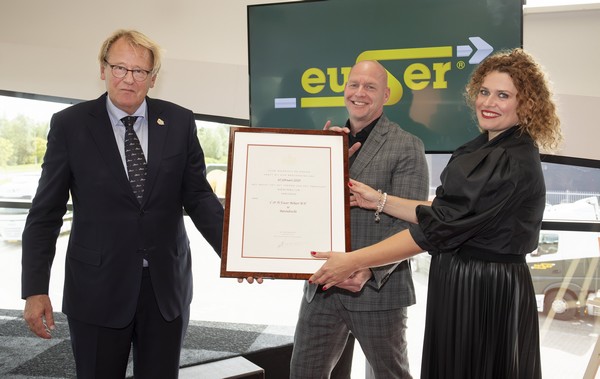 Large companies, institutions, associations, or foundations that are at least 100 years old can request the Royal predicate. The business owners must be beyond reproach as must the company itself. The history of the company's origins must also be clear. The predicate symbolizes the King's respect, appreciation, and trust toward the recipient.

" It's extraordinary that we've received this Royal recognition during the corona crisis," say Lisette and Bas. The run the company together.

Barendacht's Mayor, Jan van Belzen. is proud of this family business. "As the town's mayor, I am proud of this recognition awarded this Barendrecht company, Euser. This business has been rooted in our community for a century already. It still contributes significantly to Barendrecht's economic dynamic. This is a great achievement," he says.

How it all started
One hundred years ago, World War I had just ended. In 1919, a farmer's son, Aart Euser, started a horse-and-cart delivery service in the town of Barendrecht. Day in and day out, Aart drove his route, servicing an ever-growing client base. After the Second World War, his sons, Cor and Henk, expanded the delivery area. As Gebroeders Euser, they included the regions of Rotterdam and Drechtsteden. Each had his own truck.

Back in the 1970s, Barendrecht has the largest fruit and vegetable auction house in South Holland. That led to the third Euser generation, Ad, Cor's son, and later, Bas, Henk's son, to shift their focus. They increasingly focused on 'air-conditioned' fruit and vegetable transportation and daily fresh products. By the end of the 90s, the fourth generation of Eusers, Lisette, had joined the large Euser transportation company. She is Ad's daughter.

These days, Bas (53) and Lisette (40) stand at this family business' helm. C. & H. Euser Beheer now has 12 locations throughout the Netherlands. It has more than 350 trucks and 600 employees. It can, therefore, be counted at one of the country's largest 'air-conditioned' logistics service suppliers.

Royal in the time of corona
'The corona crisis is, of course, not the first crisis the company has endured in its 100-year existence," says Bas Euser. 'But it's unusual. And we're proud we're considered an essential sector. We're a major service provider in the food and healthcare sector. We have short links, can switch quickly, and have modified processes. In this way, we could immediately supply the supermarkets. We could also further intensify distribution in the care sector. On the other hand, the supply to the hospitality sector was reduced to a minimum. That happened from one day to the next."

Lisette adds, 'We're proud that our people proved to be flexible. Especially in these times. Our company, therefore, managed to keep its quality and service on par. The Royal predicate provides an extra dimension. It's an important recognition. It just gives us more confidence in the future."