Per capita consumption around 27.2 kg per year:

The Corona situation makes for more expensive vegetables, and this includes tomatoes. With an index of 120.7, tomatoes were significantly more expensive in March 2020 than in March 2019 (index 107.4), according to the Federal Statistical Office. Yet tomatoes are still the  favourite vegetable of the German consumer.

According to the Federal Information Centre for Agriculture (BZL), the per capita consumption of 27.2 kg in marketing year 2018/19 is similar to that of previous years. In 2018/19, Germans consumed a total of 2.26 million tonnes of tomatoes, including processed products such as ketchup or tomato paste.

More German produce - fewer tomatoes from Italy and France
According to the Federal Statistical Office, the annual harvest of tomatoes in Germany has increased from about 73,300 to almost 107,000 tonnes since 2010. Nevertheless, most tomatoes come from neighbouring countries. Almost 80 percent of total imports in 2019 came from the Netherlands and Spain. While imports from Italy and France have more than halved, imports from Poland are increasing: 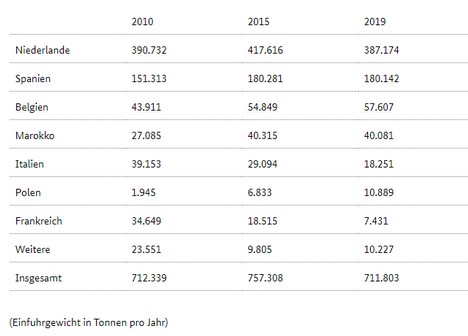