South African blueberries on the rise

While South African blueberry cultivation is still small in size compared to other fruit sectors in the country such as citrus, apples, pears and table grapes, it has grown exponentially over the past 5 years.

In the past 9 years, the area of ​​blueberries has increased by 30%. This growth is due in large part to the continued investments of the local blueberry growers and the entry of international growers, especially from Europe. The Industrial Development Corporation (IDC) has also been a driving force in the development of the soft fruit sector by funding several projects across the country and encouraging the creation of an association, the South African Berry Producers Association (SABPA). 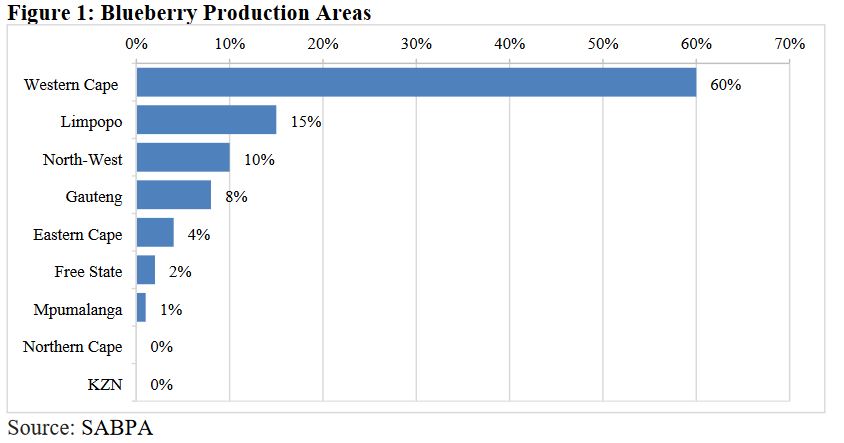 The United Kingdom (UK) is the largest market for South African blueberries, representing 53 percent of total exports, followed by the Netherlands (22 percent), Germany (8 percent), Ireland (6 percent), Spain (4 percent) , Malaysia (3 percent), Singapore (2 percent) and the United Arab Emirates (1 percent). This is largely due to the influence of UK-based growers and marketers, who have played an astonishing role in establishing the sector in South Africa. South Africa in particular has a free trade agreement with the European Union and the UK.

In terms of the global blueberry market, South Africa's main competitors are South American countries such as Chile, Peru and Argentina.

Based on the increased acreage and new plantations starting to bear fruit, the increase in cultivation is estimated at 22% to 22,000 tonnes in 2020/2021.

As a result, exports are expected to rise 20% to 18,000 tonnes in the same period as the effects of Covid-19 do not throw a spanner in the works.