A gap in the supply of Queensland strawberries led to severely higher than usual costs in recent weeks, according to one Victorian retailer.

Director at Alexanders Fruit Market in Oakleigh, David Zahlan, says supply has been very short and very tight, due to Queensland's cold weather and the fruit not coming on. It has delayed the season, which is putting a lot of pressure on price because the volume is suffering.

"We only started getting stock from Queensland two weeks ago," he said. "So, precluding Queensland, our sales were phenomenal, we were flat out. The first week or so of (Queensland) strawberries, we really struggled because we couldn't get them. The prices were super-duper high, we were paying $90 a tray. It’s usually about $30-$40." 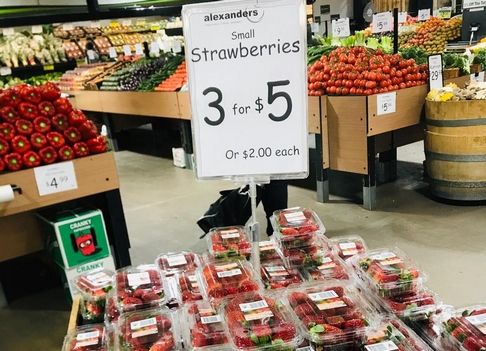 He added that demand has just settled down and strawberry prices right now are back down to about three dollars a punnet wholesale. The transition between local Victorian strawberries and the fruit from Queensland meant a big supply gap, leading to high demand and prices.

"So, the local's finished and the Queensland's didn't overlap," Mr Zahlan said. "So, the last couple of years Queensland's overlapped with the local season, which has kept the price cheap. This year there's a big gap between the two. Queensland hasn't quite fired up and the local stuff finished off too quick. Local held on probably an extra month. Normally they finish at the end of Easter and then they kept running on. So, you had to buy. Everyone's retailing an about $4 a punnet, which is a bit on the high side."

"It will shift between the berries depending on price point," he said. "Strawberries were the tail end of it. Blueberries and raspberries were reasonably high, and then all of a sudden strawberries would shoot up, and the demand doesn't keep up. So, the price shot from approximately $30 to $40 a tray to 90 bucks. So far what's come through has been good. It's really good, we just struggle to get the volume through. We couldn’t buy strawberries at the market. So, it's gone the other way with the cold snap in Queensland meaning strawberries have not to come on."

Throughout the summer and autumn months, where the strawberries are grown in the southern states, Mr Zahlan says the local fruit is bought directly off farmers from Silvan, near Monbulk in Victoria.

"We were locally buying, we're sourcing direct off-farm, where we had an agreement and we were paying one price all year, which is not the norm for the industry," he said. "The Victorians were sourcing locally too now, that we're buying out of the market, we're currently sourcing out of independent farmers."

Being a fresh produce retailer, Alexanders Fruit Market is also finding that COVID-19 lockdowns, which resulted in the closure of foodservice companies nation-wide, have caused retail sales to dramatically increase.

"People are coming to retail stores like ours because it’s a highlight of their week," Mr Zahlan said. "They come, relax, talk to people. They’re also cooking a lot more, so they’re buying fruits and vegetables they can experiment with. We’re seeing a lot of people buying stuff they’ve never heard of before coming into the shop. We don’t do delivery and we don’t have to, because people want to come and shop at the market."