Sanguines: The 2020 season looks good with an overall potential of 1,700 tons

In 2015, Starfuits® decided to combine the PêcheVigne® with the Nectavigne®, a more than 30-year-old nectarine with blood-coloured flesh, and created the concept of peaches and nectarines with blood flesh: the Sanguines®.

More than a category, the Sanguines® is the undertaking of producers who are strongly committed to preserving and boosting the richness of the 100% French gastronomic heritage. Despite some losses due to the frost episode in March, the spring offered weather conditions favorable for the growth of the Sanguines®, even if the first half of June was cooler and more humid. The fruits are healthy and with no major defects observed to this date. The calibers are satisfactory, and so is the quality level.

The 2020 season looks pretty good with an overall potential of 1,700 tons, half-PêcheVigne® and half-Nectavigne®, ensuring the presence of the Sanguines® on the shelves for the whole summer season, from July until the end of September. These varieties produced and marketed in France are spread over three production basins: the Coteaux du Lyonnais (historical land for the production of vine peaches), the Rhône Valley and the Crau. 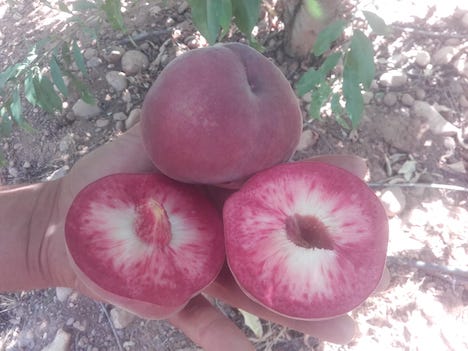 70% of the Sanguines® will be sold in supermarkets, but these nectarines are also highly prized by chefs who appreciate their subtle and original flavors. There are currently 150 hectares planted, with an acceleration of plantings in recent years (50 hectares planted in the last 3 years).