On 30 June 1995 - 25 years ago - seven growers founded the Prominent growers' association. These were entrepreneurs who wanted to improve the Dutch tomato's image. They wanted to do so by offering a better tasting, better quality tomato. And by doing so, get a better price for the product.

And look at where they are now. Time to celebrate, the association members reckoned. Chairman Jack Groenewegen, general director, Jan Opschoor, and DOOR's commercial director, Perry Dekkers, took to the road for this occasion. They went around 'toasting' several people who helped build the present-day Prominent over a cup of coffee. 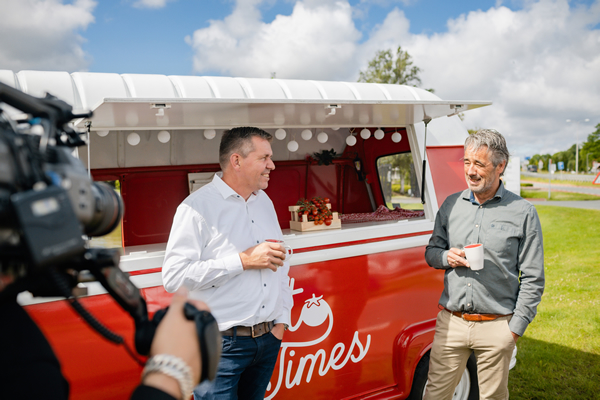 Chairman, Jack Groenewegen, spoke to people who helped build Prominent into what it is today. Here he is with Ben Zwinkels of Rijk Zwaan. Photo credit: Frank v.d. Burg.

Jack, Jan, and Perry got into the Prominent van and took to the road. This is part of the company's 25th-anniversary celebrations. They visited people who had watched Prominent grow. They wanted to know, 'How did they experience that growth? And what characterizes Prominent farmers?'

Jack drank his first cup of coffee with Margreet van den Bos. This was in the business's new building's parking lot. The new site is located alongside the A20 highway in the Netherlands. Margreet was one of Prominent's very first employees.

He then drove to the Dutch vegetable breeding and seed production company, Rijk Zwaan. There, he, Ben Zwinkels of Rijk Zwaan, and Prominent's former chairman, Jan van der Voort shared a cup of coffee and a chat.

Then it was Perry's turn behind the wheel. He had a good talk with Jan Prins of Zijtwende International. This company has been a DOOR/Prominent partner and client since day one.

Doing business together
Prominent not only collaborates when it comes to cultivation, packaging, new varieties, and staff placement. They also work together to develop knowledge and innovate. This is in, for instance, the areas of data, sustainability, and energy. The DOOR cooperative also takes care of all the commercial aspects. These include marketing and sales.

"That even got us the Floricultural Entrepreneurship Award at the beginning of the year. Prominent growers are business people in their own right. But they are all on the same course. Because, only together, can we tempt consumers to eat more tomatoes more often." 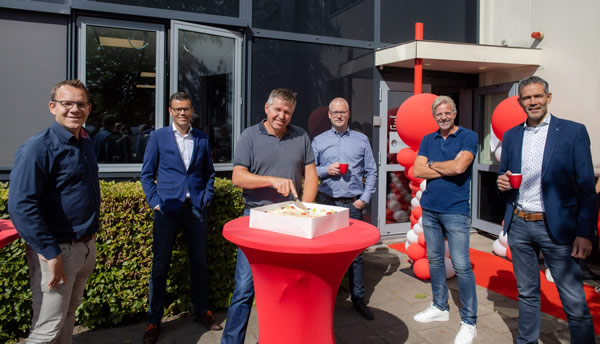 Involved employees
Time was not only taken in this anniversary week to celebrate the partnership between growers, suppliers, and partners. The massive involvement of the more than 100 Prominent employees was also noted and appreciated. "Sadly, the big planned party couldn't go ahead. But we came up with an alternative. There's cake enough for everyone. And all employees, recruitment agencies, and farm laborers will be given a nice summer gift," concludes Jack.

Together, the 29 tomato growers affiliated with Prominent, have a 440-hectare cultivation area. The label's packing center packs more than 70 million kg of tomatoes annually. Prominent is a Coöperatie DOOR U.A. brand. This organization does sales and marketing for the product.