"Demand was so great that there were supply shortages"

The innovative PROBAND V banding process from the Kranenburg company project Service & Produktion LLC was one of the absolute highlights at this year's Fruit Logistica. It was not unexpected that the machine with its quick-change frame was nominated for the coveted Innovation Award. We talked to Product Key Account Manager André Vois about the great response during the world's leading trade fair and the current marketing of the machine in times of Corona.

Over 300 enquiries from numerous countries were received by the headquarters of project Service & Produktion LLC in the first few weeks after the trade fairs. "The response in the wake of our presence in Berlin and Nuremberg at BioFach was without doubt astonishing. The demand was so high that we were barely behind schedule with production and in some cases there were delivery bottlenecks," says Vois. 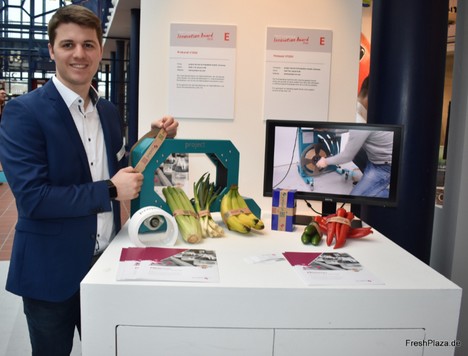 Kevin Kopytziok presents the PROBAND V 1000 at the Fruit Logistica 2020. project Service & Produktion not only supplies the banding machine, but also the appropriate banding material, such as the paper band PROGREEN with less than 5% plastic content. Further advantages are: one frame for all banding widths of 25-60mm, welding of different band thicknesses and widths by ultrasonic welding.

Increased demand for automation
The environmentally friendly packaging concept is particularly well received in the organic scene, the company continues. "However, we actually see great potential in all areas of the food trade. Basically, our solution can be used to quickly and efficiently band almost all types of fruit and vegetables, whether courgettes, bananas, celery or sweet peppers. In the meantime, the company has also found exclusive contract partners in Spain, Austria, France and the Netherlands, who will represent the company on the local market."

Before the outbreak of the coronavirus, dispensing with plastics and environmentally correct product packaging was probably the most important issue in the food industry. Since then, the discussion has been overshadowed by the pandemic. But the crisis has also had a positive effect on the marketing of the machine in practice, Vois notes. "Due to Corona, large producers and packers are struggling with an acute shortage of personnel, which has resulted in a corresponding demand for highly automated solutions. Our solution fits seamlessly into this trend." 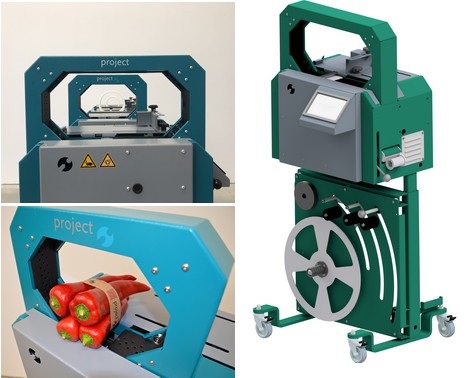 The machine concept has been able to establish itself beyond national borders and is also well received in Spain, for example. In addition to fresh fruit and vegetable products, revenue stamps are also rapidly gaining in importance in the convenience sector.

PROBAND V 1000
At this year's Fruit Logistica, the PROBAND V 1000 model was particularly in the spotlight. In the meantime, the process has been further tested and optimized accordingly. "We have been able to significantly increase the speed of the machine. Depending on the application and product, the machine can achieve up to 24 cycles/minute."

In addition, the quick-change frame allows the machine to be flexibly equipped with different arches (round arches, square arches) as required. "Another unique feature of our machine is that the display only shows universal symbols in colour. This means that even foreign seasonal workers can operate the machine without having to change the language". By the end of the year, we plan to bring more news to the market.

Upcoming exhibition date in Karlsruhe
Even the adverse circumstances of the Corona period were no problem for the company project Service & Produktion. Demonstrations were still requested by the customer. Of course, great importance was attached to the distance rules and compliance with hygiene measures. According to Mr. Vois, this worked quite well. "During the crisis, we also actively promoted our machine on YouTube and other social media. The next trade fair date at the expoSE in Karlsruhe is being planned."