This year's Belgian cherry season started even early than last year. "Last year, we were already early. But, this year, we're even earlier. It seems the cherry season's advancing. We're five to ten days earlier than usual," says Karel Belmans of the Belgische Fruitveiling. "The early cherry varieties sold extremely well this year. We began with the late varieties last week. A huge supply of Kordia and Regina are expected over the next two weeks. There's enormous demand, both domestically and internationally." 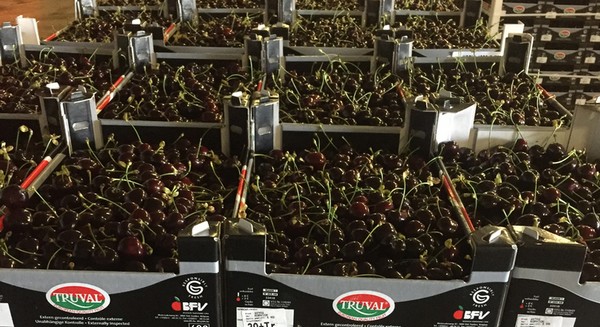 "About 40% more cherries than last year were lost due to the frost. In contrast, Reginas are coping well this year. This variety withstood the frost very well. We're, however, being cautious with supply estimates. That's because rain's being predicted. The rain might cause the cherries to burst. Then, the losses will be even greater. But the frost did ensure that the fruit could grow out better. So, this year we have nice, big, good quality cherries."

About 25 to 30% of Belgian cherry cultivation is currently covered. This percentage is much higher in the Netherlands. According to Belmans, that's because Dutch cherry farming is far more spread out. Growers can earn better money. "In Belgium, cherry farming's very concentrated. There's, however, a definite focus on covered cultivation. I think we could have 40% covered cultivation if the prices allowed for that. This type of farming costs more, after all."

"We closely follow the development of new cherry varieties. That's because we're always looking for better cherries. Our current range is already excellent. But it can always be better. The early Samba's a high-quality cherry. It's, however, a technically difficult variety. We're optimistic about the current season. It started well, and the cherries are of top quality. We only hope there will be no heavy showers in the next few weeks. But, there mustn't be extreme heatwaves either," Karel concludes.