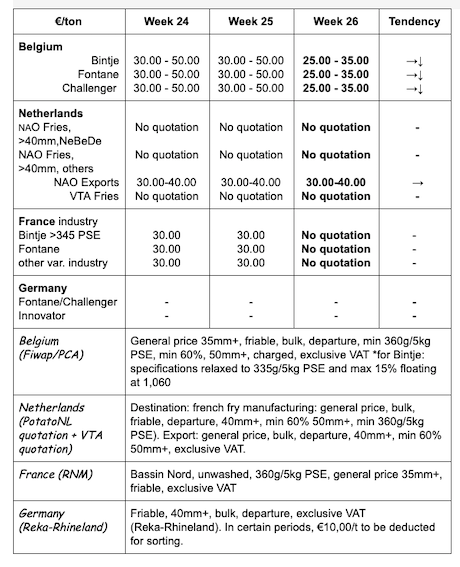 Processed potatoes: the market is calmer again. Some manufacturers are still buying (in addition to the contracts which are being removed just a little late) small volumes, of mainly the Fontane variety. Producer prices vary between 2.50 and 3.50 €/q. We note a little bit of demand for export (Eastern Europe, England). 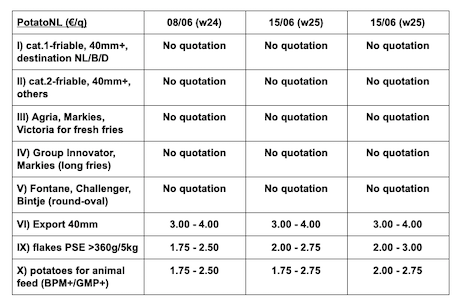 Significant volumes are evacuated to export and livestock has allowed the markets to stabilize but at a very weak level. The demand for livestock remains strong and prices have even improved slightly. Factories are increasing their activity with the economy picking up again and the reopening of fast-foods and restaurants. The granting of public aids in France and the Netherlands tends to limit the supply (collateral effect).

On the fresh markets, the supply of imported as well as Dutch early potatoes increases. The first native early potatoes - on sale at the Roeselare veiling - with a delay of 2 weeks, at prices between 57 and 88 €/q. Export has dropped to nearly zero, except for small volumes to Africa, between 8.00 and 12.00 €/q, calibrated and packed for departure.

Industrial processing in decline (source: NAO via VTA): Dutch factories worked 215,000 tons last May, which is 22,600 tons more than in March. We estimate that overall, the Dutch industry turned at 65% of its activity observed in May 2019 (which had reached 327,000 tons). Figures are better than what was feared at the beginning of the crisis. Over the past 12 months, the Dutch industry used 3,581 million tons, which is almost 300,000 tons less than last year (-7.7%).

Good export activity in May (source: NAO via VTA): fresh Dutch exports reached 57,800 tons last May, thanks to the demand at low prices from Eastern Europe (Poland, Romania, the Czech Republic and Hungary). The season total reaches 750,323 tons, an increase of 20,000 tons.

Transactions on the free market are based on very limited quantities. Factories prioritize their contracts. The volumes purchased in recent weeks for pick-up in early July help cover the needs in a context where actors wait for the early potatoes. The propositions made vary between 25 and 30 €/t (up to 50 €/t for peelers). Prices are given as an indication in the absence of transaction.

Germany
Fresh market for early native potatoes: sales at the farm and on the markets (Palatinate, Rhineland, Baden-Württemberg, early regions of Lower Saxony…) and in the stores are increasing. Prices, after a general decrease, suddenly dropped on Friday, with the rains and the increasing offer. The first no-peel potatoes are expected mid-June. Rhineland, early potatoes: between 76 and 84 €/q, depending on variety, quality and location. Palatinate: between 60 €/q (soft flesh) and 62 €/q (firm flesh).

Organic potatoes: in the Palatinate (and other subregions with “progress”), the early native organic potatoes are sold at the farm and on small local markets. At the end of June, the first “peaux faites” will be sold in supermarkets. 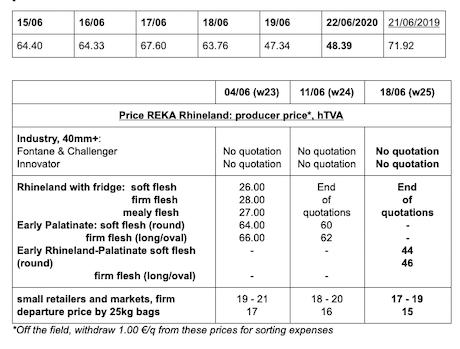