There may be fewer Piñata strawberries on Australian supermarket shelves this winter - due to the effects of drought on strawberry runners - but leading producer Piñata Farms says fruit quality is as good as ever.

"There's no doubt it's a challenging season. Yield is down and we're facing a potential industry-wide worker shortage due to COVID-19 travel restrictions during the August peak. However, that's farming and producers are well accustomed to delivering a crop despite adverse conditions," Mr Scurr said.

He said two years of drought in the Granite Belt region - where most of the industry's runners were grown - resulted in fewer plants and poor quality plants.

"Runners also arrived late which delayed planting by about three weeks. However, ideal growing conditions on the Sunshine Coast since Easter and excellent crop management by our team, has turned that around. We don't have as many strawberries as usual but what we have, is excellent."

"The BerryWorld crop - grown under polytunnels to mitigate weather risks - will also be down in volume, once harvesting starts in July as the plants were also grown in the Stanthorpe region. The main variety we grow was selected for flavour and appearance, so we're confident this season's berries will tick those boxes," he said. 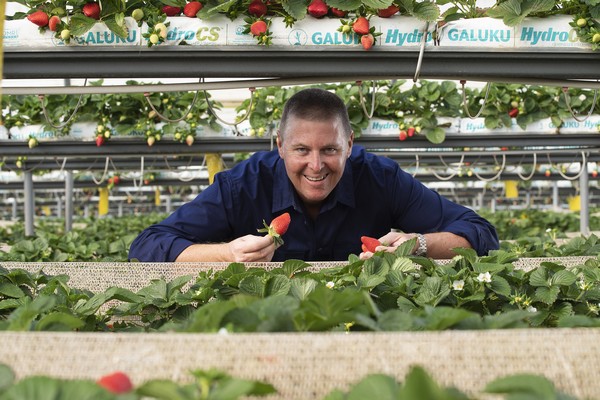 Harvest worker shortage looms
Mr Scurr said Piñata Farms currently had enough harvest workers. However, that could change by August when up to 100 extra workers might be required in the field and the packing shed as the crop reached its peak.

"Unless COVID-19 travel restrictions ease by then, allowing more seasonal workers to enter Australia, we're going to be short. We won't know until it happens," he said.

"We'd love to hire Aussies and particularly locals to support our community, but they rarely apply for work here. We're grateful that the Government extended temporary visas for backpackers but for many growers, there's just not enough to go around. We urge anyone looking for work to apply. Seasonal work could be a great stop-gap for those recently made redundant due to COVID-19."

Piñata Farms is a member of the Australian Fresh Produce Alliance (AFPA) which lobbied successfully in April for temporary visas to be extended for 12 months. The AFPA is now exploring various options to ensure a reliable harvest workforce for Australian producers.

"The only impact from COVID-19 on strawberry operations has been on the availability of harvest workers. Like all producers, we've had to implement social distancing and increase the frequency of cleaning but stringent sanitisation is not new to anyone in the food industry," Mr Scurr said.

"We intend to grow strawberries at Stanthorpe again when we have a reliable water supply," he said.

"We have the irrigation and packing shed infrastructure built for the future at Orielton," he said.