This year's corona pandemic has made it considerably more difficult to import Iranian products. It was also an exciting time for Javad Nobowati (on the right in the picture), the former Iranian sales

representative in Germany and for two years managing director of EuroMinoo Import & Export. While the situation is easing slowly but surely, the businessman is now looking forward to the future with confidence again, he confirms when asked.

Since four months Mr. Nobowati remains permanently in his home country because of the strict lockdown. However, he plans to return to Germany soon and resume his business activities. "After a long career at the ministry and embassy, I founded a trading company in Kassel together with my partners two years ago. Up to now we mainly imported date products, such as date syrup, powder, spread and dressing, which we sell to the retail trade in this country under the Minoo brand. Our products are already listed at several Edeka stores, the next step would be to supply the Edeka head office directly." 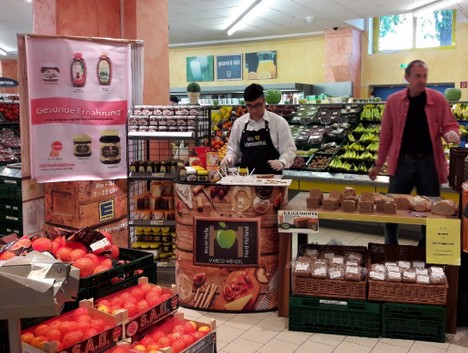 The majority of EuroMinoo's date products end up on the German market. In addition, goods are also delivered to Switzerland and the Netherlands. Currently the German headquarters are in Kassel, but in the future Mr. Nobowati plans to establish his own LLC in Hamburg. Picture: EuroMinoo

Fresh fruit from Iran
But the ambitious specialist retailer also wants to expand its business activities to other areas of the trade. Talks are already being held with potential trading partners in the Iranian capital Tehran, so that fresh fruit grown there can soon be exported to Germany and Switzerland. The aim here would be to exploit the great export potential of Iranian products. Nobawati: "More than 70 different fruits are produced in Iran, and theoretically we could supply them all. We think there is an enormous potential, particularly in the German fresh produce market."

Iranian products at the bazaar in the western Iranian city of Tabriz.

Watermelons from Iran are already offered sporadically at the wholesale market, but at the same time of the year there are also oranges, which up to now have only been sold at the domestic market. "From August, tons of pistachios are harvested, mainly in the southern growing areas of Iran. Our task is to increase the awareness of Iranian products."