This week’s PMA virtual town hall focused on the global impact of the pandemic and how key regions have been affected. To start off the session, a discussion of national GDP growth looked at the effect on specific economies and possible timelines for recovery. A chart from America’s Market Intelligence agency pooled together data to make projections of the GDP growth for selected countries with predictions on when they might return to pre-COVID levels. The chart, however, was put together prior to the outbreak of the second wave in China, so the prediction that China would be the first to recover might no longer be accurate. 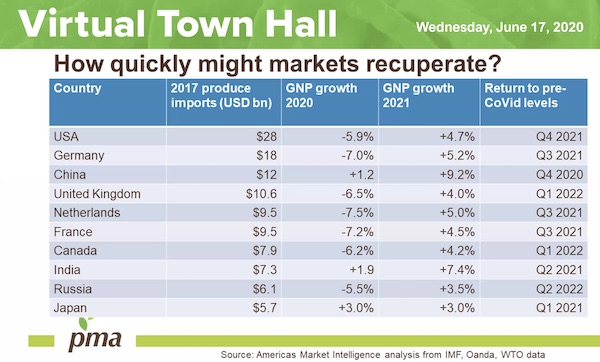 Tourism reduction affects foodservice revenue potential
Another chart looked at the best- and worst-case scenarios for Spain. The best-case scenario projection shows the country’s GDP to recover in 2022, but the worst-case scenario, which reflects another wave coming across the population, shows a bleaker future, with the GDP taking a longer time to recover. One of the contributing factors that is affecting the current rate of GDP recovery for Spain, as well as for many other countries around the world, is the loss of tourism.

According to numbers brought forth by the panel, 34% of foodservice revenue comes from tourism in Spain. With the borders being closed for tourism due to the pandemic, even with the reopening of restaurants, revenues will continue to be affected. Similarly, in China, foodservice was very driven by travel and tourism. In Mexico, too, the tourism industry has fallen by 80%. There might also be a ripple-effect, even after tourism is allowed to resume near-normal activities: people who have lost their incomes or find themselves in tighter financial situations than they were in pre-pandemic, will be less likely to take vacations, or spend money at restaurants.

Back to basics: fresh produce purchases rise
Fortunately for the produce sector, while economies have been severely affected by the pandemic, fruit and vegetables sales have generally grown. This is a trend that is observed in many countries across the globe. The general consensus from the panel was that the increased focus on health was one of the reasons for this. Additionally, when people are faced with difficult financial situations, they often return to the staples in their supermarkets; they’ll forego more high-end items, and will focus on the basics, such as fruits and vegetables. In China, particularly, food is often seen as medicine, and the overall fruit and vegetable consumption per capita is very high. Similarly, in Mexico, while every other sector in the country has been badly hit, the agro-industrial sector has actually grown.

Looking back on the numbers from the last big economic crisis in 2008, the economic pressure and unemployment were very high. Despite this, the demand for fruits and vegetables did not decrease by much. The demand for food, in general has an income elasticity of zero, meaning that there is little to no reduction of overall food consumption during a recession. Though a global pandemic is much different than a recession, similar patterns of food consumption can be seen today.

South African production volumes are up; in Mexico volumes are down
South Africa is in the peak of its export season right now and the coming six months mark an important time of the year for the growers and exporters. Right now, they are in their citrus season, while also exporting apples, pears and avocados. Soon they will start their blueberry season, and later on they will have their grape and stone fruit seasons. While there have been many challenges across the supply chain, the general mood is cautiously optimistic. The focus will currently remain on the core markets, and to remain agile to respond to the constant changes. The country’s overall production is up this year, though, so the need for new markets does still need to be addressed. That being said, the maintaining of current partnerships and collaborations will remain the most important focus.

In Mexico, on the other hand, overall production is down. Large growers are reducing their crop areas, and some smaller growers are opting to not grow anything at all this year, to wait until the markets stabilize. There have also been labor concerns in some areas of the country, which have only been increased by the pandemic. The growers are using this time to make investments into their production which will benefit them in the future: building warehouses and storage facilities, upgrading irrigation systems, and more.

Next week’s PMA virtual town hall will focus on the future of sustainable packaging.