However, only 20 of those who volunteered remain on his farm today, because the long hours, hard physical labour, and ‘a lot of bending up and down’ has led to a high drop-out rate.

‘It’s not everyone’s cup of tea, said Ed, ‘It’s very physical for starters, a lot of bending up and down. It’s long days. When we first started lot of people dropped out for that reason.’ 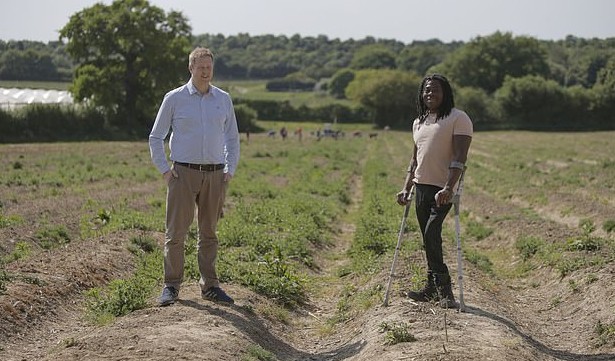 Usually around 98 per cent of seasonal pickers in the UK come from abroad, but this year it’s estimated only one third have made it here to help harvest crops during Britain’s peak growing season, because of the pandemic.

‘We have normally about 100 or 120 seasonal workers who are typically Eastern European’, said Ed.  ‘At the moment we have 50 on site as planned, in farming if you don’t harvest your crop, your work has gone to waste. ‘

Ed admitted that for him it’s nothing new. He said those who remain have been ‘really useful’ in harvesting the asparagus, herbs and lettuce they’re picking currently. Pictured, with host Ade Adepitan

The volunteer workers are the first set of British seasonal workers Ed has had on his farm in 25 years, and he expressed fears for the fate of his crops once Brexit makes it more difficult for foreign workers to enter the UK and help.