The unabated strong demand for Austrian dessert apples continued to increase in May, pushing up the average wholesale price for conventional apples, sorted and packaged, from EUR 0.79/kg to EUR 0.82/kg (+3.8%). This was the highest level in 20 months. At EUR 1.09 per kg (+6%), Gala broke through the EUR 1 barrier for the first time this year, Golden Delicious crossed the ramp at EUR 0.75 per kg (+7%) and the Idared variety also achieved a strong 11% increase in May with EUR 0.78 per kg.

As a reminder, in the corresponding period of the previous year, one and the same product was sold for an average of EUR 0,30/kg. The representative wholesale price of the four largest European apple producers (IT, PL, DE, FR) also performed well over the last 6 months, increasing by 25% to EUR 0.80 per kg over the same period. This represents an increase of 45 % over the May figure for the previous year.

Even though prices may currently be highly satisfactory at all levels, the production-related list of market failures is all the more apparent against this background. Yes, there are export successes in the direction of Africa and Asia, but these cannot in any way compensate for the Russian import embargo on EU apples. 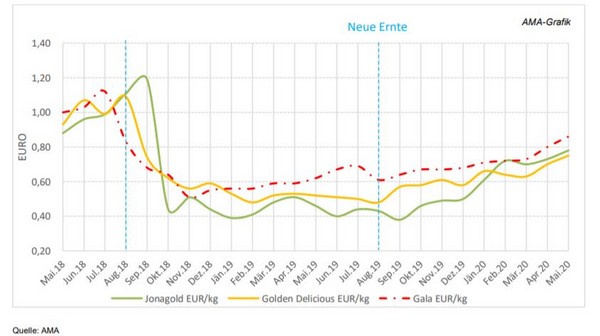 This year there is no pressure from the remaining stocks, either nationally or Europe-wide. As of 01.05., the stock level recorded by the AMA amounted to 33,839 t (bio & konv.) and thus decreased by almost one third compared to the previous month. The range of varieties is also becoming increasingly smaller. Only Golden, Idared and Jonagold will remain with us a little longer. The marketers are already withholding goods from export in favour of the domestic market in order to ensure a complete supply of Austrian goods until the new harvest.

At the beginning of May, only 1.1 million tonnes of fresh apples were still in storage throughout the EU. Compared with the previous season, this means that there is a shortfall of approx. 400,000 tonnes. Surpluses are therefore not to be expected. So there is much to be said for continued good business and a quiet end to the season.

Current carrot season is coming to an end
In May the market for Austrian carrots continued to be receptive. Although many suppliers had already completed their marketing, there were still supply gaps and shortages of suppliers. With an average of 47.50 EUR/dt, the Lower Austrian producer price for fresh produce packed in 5 kg containers, from the ramp, could be increased again in line with the long-term trend. The first relevant quantities of domestic early carrots are expected in mid-June.

Sales of onions after "Corona- Hoch" slightly declining
The aftershocks of the corona crisis were still noticeable at the beginning of the month, although the strong sales of Austrian onions already lost momentum noticeably. The export business in particular recorded weaker sales due to competitive competitors. The average wholesale price for yellow onions (40-90 mm) sorted and packaged from conventional cultivation was EUR 0,37/kg in May. As with carrots, the first winter onions are expected from week 25 onwards.

Market entry of Austrian Heurigen at Whitsun
At Whitsun the Austrian early potato season had really started. The first hectare yields were quite reasonable due to the growing conditions of the last weeks. In Burgenland and Styria, an average of 25 t/ha was grubbed up, sometimes under fleece, while in Lower Austria yields per hectare exceeded 20 t/ha. The initial price of 50.00 EUR/dt was soon replaced by an average of 45.00 EUR/dt. The price range thus remained roughly at the previous year's level. Further monetary concessions can be expected as the available quantities increase. Although one or the other pallet of alternative goods is still available for collection, in terms of quantity these remaining stocks hardly play a role.