ZON magazine usually takes interim stock of the almost-over Dutch season in June. In mid-March, growers still feared it would be a tough season. It proved to be the opposite. The 2020 asparagus season can be called excellent.

Rick Mengers seems relaxed - different from the end of May. Rick is ZON's Senior Product Manager. He's been responsible for all this Dutch growers' association's asparagus sales for several years. You won't hear him complain as he tallies the preliminary balance for ZON magazine. "It's a pleasure to do business in this way - with things going as they have over the last period."

"To begin with, there was concern about dreaded staff issues, just before the start of the season." (Due to the coronavirus lockdown, many asparagus growers didn't know if they'd find enough workers). "Most growers solved this in the following weeks. I think maybe three of four smaller farmers decided against going into production. But most other companies managed to find enough laborers in time. Not all the farmers could harvest their full 100%."

"Here and there, they certainly opted not to harvest the worse fields this year. However, across the board, I hear mostly satisfied sounds," says Rick. "In general, this led to about 10 - 20% less total supply. But, in contrast, we could set an almost princely average price for asparagus of more than €4. That's more than I've seen in the past eight years. This average price is no less than 22% higher than last year. And that was, by no means, a bad year."

Rick is also pleased with the changing approach he sees. More and more asparagus growers are adjusting their business operations. "There is a noticeable shift. It's gone from 'I'll stop then and then because I've reached my kgs for the season'. Now it's 'I must reach this and this turnover to make it through the year'. Farmers have a more revenue-related, businesslike approach.' According to Rick, this change has led to the total production gradually tapering off toward the season's end too. It has gone from about 35 tons/day to between 15 and 20 tons/day, without very sudden changes.

Export
Considering sales, it is, of course, conspicuous that the hospitality sector's demand has all but disappeared this year. That's as a result of the anti-corona measures. Could the retail industry make this up? "No, but there were other shifts. Namely that Germany - they faced the same anti-corona issues - continued importing throughout the season."

"The same goes for France. We can safely say exports have provided us with additional support. We've been fortunate with that," Rick admits. That doesn't alter the fact that I'm delighted with sales to Dutch retails. This year, the different supermarket campaigns seem to have followed up on each other, almost 'by the book'." 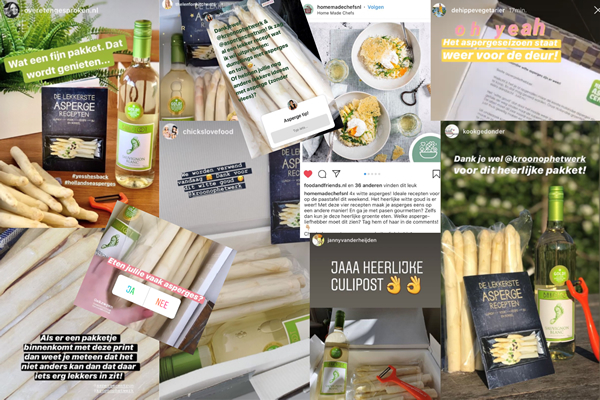 Marketing activities
Maastricht University's Tim Hilken appeared in ZON magazine's previous edition. He said marketing is vital for asparagus sales. Jenny Peters, ZON's Product Marketer, says, "that's, of course, something you like to hear, as a marketer. This year, we realized most retailers couldn't have all their asparagus-related shopfloor activities."

"We, therefore, focused on other marketing activities. For example, we again aired the 'The Queen is back' TV commercial many times. We did this along with the Dutch Asparagus Committee. We opted to include the season's last two weeks in a broadcasting schedule. We did this last year too. Then, hopefully, people will keep eating asparagus until 24 June."

"This season's traditional kick-off was canceled due to the anti-corona measures. So, instead, we sent a special 'Asparagus FoodyBox' to more than 150 bloggers, bloggers, and editors. We did this together with the Dutch Asparagus Centre. The box contained a bottle of wine, a little recipe book, and a peeler. And, naturally, fresh asparagus," Jenny explains.

"We had these boxes delivered at a very strategic moment - just before Easter. That led to countless publications about asparagus, even up to Mother's Day. These appeared in the printed media, as well as on social media. I'm even under the impression that this year's kick-off scored better than others. There are VanEigenBodem.nl asparagus recipes on our new Pinterest page. These really peaked around Easter."

There might not be much activity on shopfloors. But ZON did have a great bonus week promotion at the Dutch supermarket chain, Albert Heijn. This instore radio station featured an 'asparagus spot'. "We sold 250% more asparagus in that promotion week than in the previous week. So, it was a good result," concludes Jenny.

The conclusion's clear - despite the coronavirus troubles, 2020 has proved to be an excellent asparagus season.