With Hort Connections cancelled due to the COVID-19 lockdown restrictions, the second annual State of the Industry report was delivered via an online presentation, where CEO Darren Keating identified several trends and drivers that spread across a vast majority of the industry.

"From the consumers perspective, they are consistent trends through time, however, COVID-19 has been a real accelerator," he said. "Rather than see things come forward in 10 years, we are seeing it come forward in a timeframe of around 10 weeks. Everyone transitioned from working in the office to working from home where they could, and changes to businesses. We tried to capture those changes (in this report)." 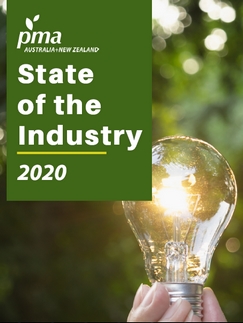 He added that there were four major trends that he expects to shape the future of fresh produce in a post-pandemic world; health, consumption, technology and lifestyle.

"Health is a strong discussion point, because if you look at the number of people now conscious of health," Mr Keating said. "Food safety has also come to the fore, not always in a good way, for example, washing fresh produce in disinfectant, which is not a good idea. But there are some positives for the industry as well, in that the focus from the consumer on eating to be healthier. Consumption has changed as well; the way we eat, how we eat and where we eat has changed dramatically. The rush towards online delivery, and it happened in a way in which we thought we needed to for all of our safety."

The market has also changed dramatically, according to Mr Keating, who says it has led to opportunities for some members of the industry, but challenges for others. But it has all been led by technology, with automated technology and robotics not only led to operational efficiencies but also improving health and safety in the workplace and information sharing.

"We need to think about taking people out of the equation, because we need to separate to be safe, but also to talk about technology to share information," he said. "These have been around for a while, but we are being forced to think about how we use them for the benefit of the whole industry. Another issue is lifestyle (changes); the fact we all converted from working in an office environment to working from home, in a relatively short timeframe is something that wouldn't have been possible 5-10 years ago. But when we take this report and look at what is going to shape the future though, there are some key trends that we are seeing that we need to pay attention to, and 'Occupational, Health and Safety' stands out for me. How do we make sure that the whole team doesn't get sick which can affect our business? Previously, we would be more focused on industrial accidents and things like that, but now health has really come to the fore." 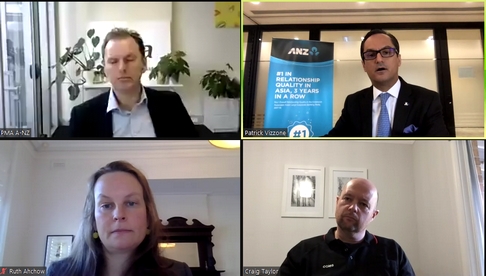 Mr Vizzone believes the fresh produce category has fared "pretty well" during the COVID-19 pandemic compared to other sectors, with impressive trade figures in early 2020.

"We surprised to see that trade numbers from February to April, that export trade out of Australia was up 14 per cent," he said. "I think it shows the resilience of the industry and the ability to get produce out of the ground and to the market. I think that it is also a testament, that in a globalised world, that the market that we rely upon is still there. Having said that, there are some issues on the horizon that are still there that we need to think about and how geopolitics and other factors can play into it."

Based in Hong Kong, he went onto explain many parallels with the SARS outbreak, but notes COVID-19 has been so different, as the world is more connected than ever before. He says that as a food industry in general, the focus is currently on the 'unknowns' such as second and third waves of the virus, as opposed to the 'knowns', and treating it as more of a financial crisis than a health one in terms of the severity of the impact.

"We take a slightly different view, sitting over in Asia, whereas if you look at Australia and New Zealand which have been basking on a record growth, prosperity and stability, we have had a vast number of challenges over the past 25 years - some health-related, some economic-related," Mr Vizzone said. "SARS is definitely the most comparable, and there are some things that are the same, such as short dips in consumption and a dip in economic activity and production, decrease in travel - but over time that has basically returned to the long-term trend. Having said that, you can't take a broad-brush stroke. For example, technology has done very well, but transportation is not so much."

Mr Taylor also praised the industry for its resilience, from a retail and consumer's perspective, noting that with the exception of a few weeks where demand was so high due to panic buying across stores, the fresh produce category stood up well.

"When I looked across the supermarket, I would say well done to everyone for putting up one of the best departments, certainly in my business," he said. "That didn't come without a lot of hard work, a lot of conversations and a lot of input from everyone."

He added that the pandemic also vastly changed consumer behaviour, and a significant rise of home cooking, especially due to the closure of public eating venues such as restaurants and cafes.

"It has had a massive impact across our business," Mr Taylor said. "We have been told by our Insights team that we have had a 71 per cent increase in time people spent online looking at cooking websites and food websites, and over 30 per cent of our Coles community are telling us they are cooking more from home. We are seeing vegetables have been the big winner for us, so things like ginger and leek right across the store. Those cooking at home categories have seen exponential growth in demand – my question is whether this behaviour will stick."

Ms Ahchow has worked with government departments around ensuring security around the supply chains, and with COVID-19 coming as a major unexpected event, she raised one of the challenges that is balancing the supply from how much food is produced locally to internationally - both now and into the future. She says different industries were impacted differently in terms of products they could import and export, from fruit and vegetables, and mining exports, to car products requiring imported parts.

For more information and to view the report and executive summary, click here