Following the success of their Organic Ridged Plantain Chips, Barnana®, known for their unique upcycled banana and plantain-based snacks, will be releasing its newest product line, Plantain Tortilla Chips. The new chips will hit west coast markets in June 2020, and online via the ‘shop’ page on Barnana.com and Amazon beginning July 1, with an expected national retail distribution by early fall. The new Plantain Tortilla Chips will come in two flavors, Himalayan Pink Salt and Lime & Sea Salt. Each bag contains golden brown chips made from delicately seasoned ground plantains cooked in avocado oil for the perfect crunch to satisfy any salty craving. 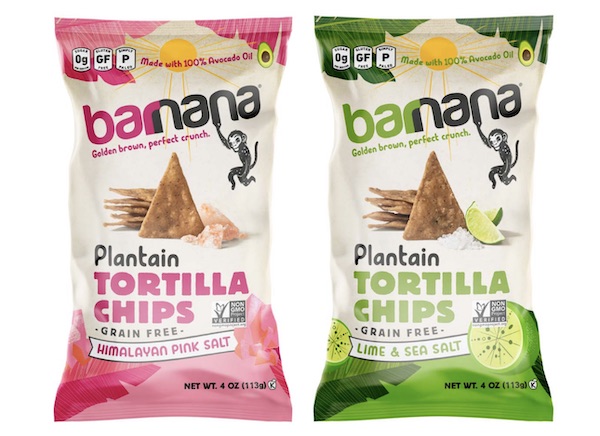 At the same time, Barnana is also revealing its redesigned packaging and logo created by internationally recognized Brazilian artist and illustrator, Speto. Known as one of the most talented graffiti artists in the world, Speto gained worldwide acclaim during the 2014 FIFA World Cup. His work has been exhibited in museums such as Palais de Tokyo in France, Museu Afro Brasil in São Paulo, and in several galleries in the United States and Europe.

“We’re honored for Speto to be a part of Barnana’s brand evolution,” said Suplicy. “We wanted to work with him as he not only speaks to our Latin American roots, but he also shares our vision of creating positive change in the world.”

The Barnana logo will now be accompanied by “Nana,” a whimsical, playful monkey created by Speto. Designed in his signature free-spirited style of street art, Speto created the Nana character to help bring awareness to Barnana’s important mission of reducing food waste and promoting regenerative agriculture in the Amazon. He developed this banana-loving monkey based on the endangered Spider Monkey found in the tropical rainforest of Central and South America, the region in the world where Barnana plantains and bananas are sourced. This is the first time that Speto has worked on a non-limited-edition design for a brand.

Since Barnana was founded more than seven years ago, Barnana has saved over 100 million bananas from going to waste by upcycling “imperfect” fruit into delicious snacks. Helping catalyze a broader upcycling movement, Barnana is a founding member of the recently formed Upcycled Food Association (UFA). The association’s goal is to educate consumers about the critical climate benefits of reducing food waste and explaining the important difference between ‘upcycled’ and ‘recycled.’