"Price of Chinese lychee did not develop as expected"

"The production season of Hainan lychees is over"

"The Chinese fruit market is in depression as a result of the outbreak of Covid-19 as well as numerous occasions of extreme weather conditions. Sales are less than ideal. However, lychees are a popular fruit and the lychee price developed in two opposite directions this season." This is according to a Chinese lychee trader from Hainan who recently talked about current conditions in the Chinese lychee market.

Industry specialists undertook a survey at the beginning of this year. Many production areas shared their expectation of an abundant harvest this season. The price was therefore expected to decline because the supply volume significantly increased, and this is what happened in most production areas, but not in all of them. In some production areas the expected developments did not occur. 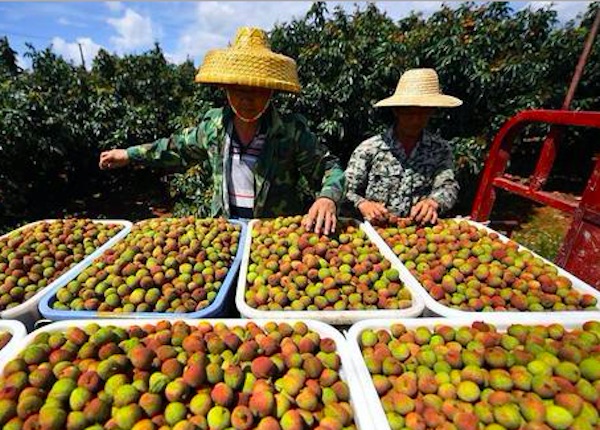 "Hainan lychees entered the market earlier than lychees from other Chinese production areas. And contrary to predictions, the price of Hainan lychee remained stable this season. At the very end of the season, the price of some lychee varieties even showed an upward trend. This was the case for Feizixiao [Concubine's Smile] lychee. Some online traders experienced financial difficulties because the price did not develop as expected."

"The sales conditions for lychee from production areas in Guangdong were much worse. The supply season finished in early June. The supply volume of Feizixiao lychee was extremely limited and there were obstacles that made sales more difficult. Poor weather conditions had a major impact on lychee sales in Guangdong."

"The market was difficult to control, whether for traders or farmers. Sales conditions were affected by factors that were outside anyone's control. However, regardless of circumstances, traders who maintain product quality can always find a way to establish a foothold in any market."