Australian citrus still has plenty of potential in the Asian market

With Asian cultures switching to a diet that includes more fruit, an Australian agribusiness consultant believes there are still plenty of opportunities for Australian citrus exports to grow.

Head of Agribusiness Insights at ANZ, Michael Whitehead says consumption, particularly in China, traditionally has been around grains and vegetables, but it is now shifting to being more meat and fruit-based.

"What is intriguing from an agricultural economics point of view is that the Australian citrus share has stayed roughly the same," he said. "It shows that in terms of competing fruit for that Asian palate, or that discretionary palate, there is an opportunity to eat further into that in terms of marketing and consumer perception. Overall horticulture market share or overall fruit exports is going up in an absolutely impressive past 10 years. Chinese consumers are buying a lot of discretionary products, and that means great things for products like citrus. The (Chinese) government at the same time will encourage those, because they want to encourage a healthy diet." 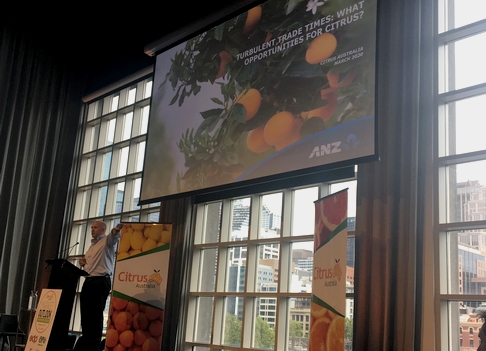 Mr Whitehead runs the Agri-Research and Strategies team at the ANZ bank and has a strong farming background from earlier in life. He pointed out that the export unit price continues to rise strongly for citrus varieties in Valencia and Navel oranges, and mandarins.

"How does the citrus industry compare to other industries (dairy, wool, meat and all horticulture) in terms of overall export growth in the past 20 years?" he said. "It really is a good story; compared to all other industries, apart from wool, the growth has continued to go up and up - it has kept pace with everything else. If we look at the past 10 years, that is even stronger. Australian citrus exports in terms of production of the mandarins and oranges being exported, it has gone up over the past ten years from around 20 per cent to 50 per cent."

Something that the citrus industry is going to have to consider, according to Mr Whitehead, is when that percentage is going to plateau, based on what the Australian consumer is willing to pay compared prices paid in overseas premium markets.

"Going forward, and it is an industry strategic question, at what percentage of exports continue to go up, or does it plateau when you get the right mix between domestic consumption, and what the overseas market will pay, particularly the Chinese?" Mr Whitehead asked. "It's fascinating in meat, Australian consumers are eating less and less beef and lamb. The reasonable part of that is because they are getting to the supermarket and saying 'I'm not paying that'. Part of the reason is because so much of the good product is going overseas for a premium price."

Mr Whitehead points out that a strategy to diversify export markets, to avoid concentration risks, is to focus on where the premium products are going.

"Is the United States open to marketing more Australian premium products? Is the Middle East an option as well?" he asked. "There are people returning saying there is so much potential in Saudi Arabia as it opens up. If we take China out of the (export) equation, Japan remains the major market, and in terms of marketing, it really needs to be back on the radar. The Japanese diet is also changing in a big way. While the population is aging and shrinking, the diet is becoming important to young people."

Australia's major competitor in China is South Africa, but Mr Whitehead believes Australia will always have a place in that market because importers will risk too much buying from just one market. He added that a United States trade war with China will also not have much impact on Australian exports.

"A lot of it is theatre," he said. "The USA has made China agree to buy an extra $40billion worth of U.S product, up from $24billion. Firstly, I don't think it can be done, and secondly, America is not going to risk sending that much to one market that can change later on, and thirdly, China is not going to risk buying from one market. So, you can argue that it will generally wear down. What the American citrus industry wants to see the (lowering of) tariffs that have been reduced from other areas of agriculture. The Australian industry needs to continue to market on quality, flavour, food safety, and proximity."

The other major issue that could affect exports to China, according to Mr Whitehead is the coronavirus pandemic, on top of the African Swine Fever, which he says has still not been eliminated.

"China wants a cohesive social structure and knows that the population can do without technology for a week, but cannot do without food, so it wants food safety," he said. "They will change how food markets work; farms will become bigger and safer, and that will change how the whole food supply chain works. Retail will change in a huge way towards e-commerce, and the whole supply chain is still too volatile and unpredictable. So, how diversified it has its markets will change. At the moment, big e-commerce companies are going amazingly, because Chinese consumers were not allowed, or didn't want to go out of their homes to buy food products (due to the COVID-19 lockdown). Once the dust settles, a lot of Chinese consumers won't go back to the way it was before. Every common sense trend points towards that this will grow in Australia too."