Given the buoyant growth in the local blueberry industry, it is only natural for them to now introduce the Elifab Berry Class sorter, employing Ellips fruit grading software technology.

“Effectively the Ellips grading technology is already running on about seventy of our apple and pear machines, while over the past five years there has been phenomenal and consistent growth in South Africa’s blueberry industry so it made sense to focus on this thriving and growing market,” says Rory Cole, managing director of Flowpack Systems.

“There’s nothing like this sorter currently in use in South Africa. Its speed and the way it grades, is phenomenal. It has the highest volume capacity in the market, grading around 200kg per lane per hour, resulting in a capacity of two tonnes per hour on a ten lane machine. Our cups operate at about 45 cups a second.“

Unique pre-singulation system
The Elifab sorter itself is also very compact, taking up less floor space than some of its market competitors, some of which are twice the size and three times as energy-hungry as the Elifab, he notes.

“We function on about 18kW for our big machines, while our competitors are close to triple that. There is a huge saving on power over a season.”

Splitting freight grades to lower blueberry transport costs
“With our machine, you can measure the softness and acidity of a berry which is important in assisting you to split your freight grades."

He explains: "If your berries for instance have a high acidity count, then you want to air freight them and you can still get a margin as an export product. This is critical in South Africa because it’s way less expensive to send by sea. So if you can create a cut-off where you know for a fact: these berries are going to make it on sea freight, then you can cut down considerably on your freight costs. You can’t be speculating on a product like this.”

Apart from acidity, the Elifab blueberry sorter also measures all manner of defects like shrivel, dehydration, cracks and splits. It will even, Rory says, pick up if a flower that is still attached to a berry. 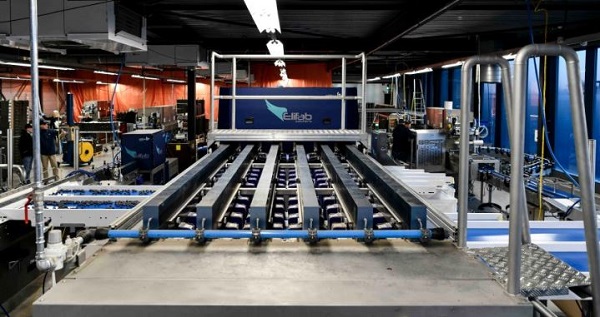 Measuring bloom coverage
There are three cameras per two lanes taking 30 images of each berry’s 360° rotation.

The sorter’s multispectral infrared and normal infrared cameras can measure many varying degrees of softness based on light penetration through the berry, with an accuracy finer than what is currently possible in South Africa.

A third camera grades the colour to remove green berries and to measure bloom coverage, a critical component on blueberries.

Soft landings
After grading, each berry is designated a specific drop, pre-programmed according to export specifications, and as it gets closer to that drop a signal is sent and each berry gently blown off the roller.

“The force of air that our system employs blows unusually softly, due to our particular nozzle design. There are surgical silicone pouches with a unique system inside the pouches which breaks the force with which the berry lands on the cross-belt.”

Easy to clean
The Elifab Berry Class machine is designed to be extremely easy to clean, as blueberry sorting can be messy.

"Considerable thought has been put into making the machine’s maintenance and ability to clean as simple and as quick as possible through clever modular fittings and a unique automatic roller cleaning system. The ease of maintenance is unmatched in the industry."

"It’s a very scalable way of grading and measuring and you can set the machine very accurately in terms of what your market demands,” he says. noting there has been interest from as far afield as Zambia and Zimbabwe.