While sales of the table potatoes boomed in the first half of the year, the production of French fries stagnated. This is because the fried product is largely produced for the catering trade. Due to the stagnating demand, the machines are now standing still or turning more slowly - and the French fries potatoes have to be stored.

Because the tuber grown for deep-frying is extra large, white and floury, it cannot replace the potatoes from the region, which have become rare on supermarket shelves. If it is not processed within the next few weeks, it ends up with high price discounts in the starch factory, the feed trough or the biogas plant. The goods were not grown for this purpose, but otherwise there is a risk of food being wasted. 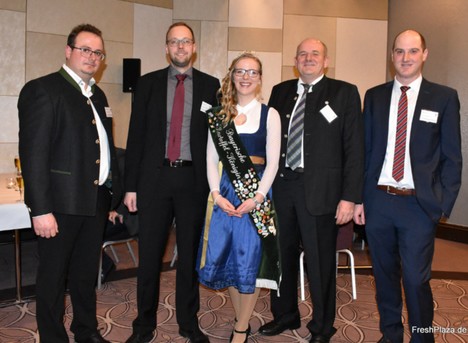 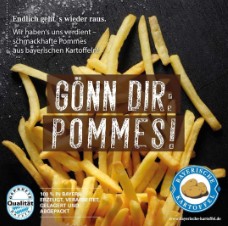 Whether in the canteen or in the restaurant, in the beer garden or in the open-air swimming pool - with every portion of fries, consumers help to ensure that the farmers from the region are able to use their potatoes for the intended purpose. Marketing Initiative Bayerische Kartoffel also considers the fries worth a campaign, and is promoting the popular potato sticks with the campaign "Gönn Dir: Pommes!" campaign into the spotlight. The company's own seal of quality and the "Geprüfte Qualität Bayern" award guarantee that the potatoes have been produced, processed, stored and packaged 100 percent in Bavaria. Under the hashtag #essenausbayern, the Bavarian Farmers' Association also promotes solidarity with the regional (rural) economy.

Damage at all stages of the recycling chain
Since the beginning of the Covid 19 pandemic (beginning of March), the French fries industry has already felt a sales crisis. "Whether producers, processors or traders - damage was suffered at all stages of the recycling chain. We want to contribute to a return of sales to their usual level as quickly as possible and we hope that the market will recover. We actually wanted to launch an initiative to improve the situation again," explains Johann Graf, Managing Director of Bayerische Kartoffel.

According to Graf, the initiative is not a "last-minute" rescue of the old ware potatoes, but is mainly focused on the upcoming harvest. "The majority of last year's French fry potatoes have already been used as alternatives - as starch, biogas, animal feed, etc. This has solved the quantity problem, but not the financial damage to the industry. For this reason, it is particularly important to react to the increased challenges with regard to the new harvest in good time.

Considerable strengthening of regionalisation
All in all, Mr Graf is looking forward to the future in a positive light, both for food and industrial goods. "In the table potato market, regionalisation has been considerably strengthened. The potato has thus once again proven itself as a versatile staple food." In the industrial sector he is probably more critical of the current situation: "Everyone has made money and made investments because the potato industry has developed well. All that has to be done now. However, I am convinced that the French fries industry will also overcome the crisis."