Cape Town Harbour was windbound since very early this morning as an intense cold front makes landfall, drenching the peninsula in rain. The Port Elizabeth Container Terminal is also windbound, but the Multi-Purpose Terminal is working and conventional ships can load.

Operations at the Cape Town Container Terminal were restarted this afternoon. 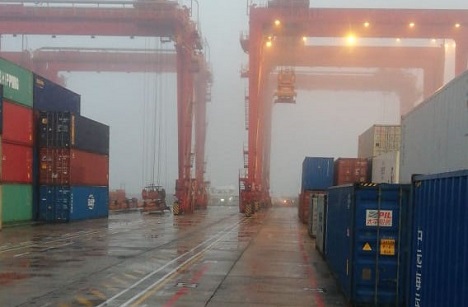 Climate disruptions add to pressure on Cape Town Harbour to work through current delays as staffing levels have been impacted by the necessity of self-quarantine, as per Covid-19 lockdown regulations.

In the Western Cape Water Supply System stands at 54.6% and despite winter rainfall the overall provincial dam level dropped by half a percentage point last week.

The South African Weather Bureau reports significant rainfall over the past ten days over much of the southwestern Cape as well as into the Langkloof and Eastern Cape: Ceres 103 mm, Franschhoek 66mm, Paarl 84mm, Joubertina 42mm, Patensie 30mm.