Latin-American currencies have swung to become the emerging world’s best performers in the past month from the worst. US-China tensions may hold the key for further gains.

A rapid rally in China’s currency would benefit the Latin America currencies most, according to a Bloomberg analysis of sensitivity to the yuan during periods when markets are being driven by trade news. The exchange rates of commodity exporters such as Colombia, Brazil and Chile have seen a one-for-one move with the yuan during times when China’s currency moved 2% or more over a short period.

While tensions between the world’s two largest economies have escalated over recent weeks, signs are emerging that the phase-one US-China trade agreement is likely to stay intact. US Trade Representative Robert Lighthizer affirmed the deal’s progress last week as China continued to buy US soybeans despite earlier reports of a halt. Although President Donald Trump continues to criticize Beijing over the coronavirus pandemic and Hong Kong, he has stopped short of pulling out of the agreement. 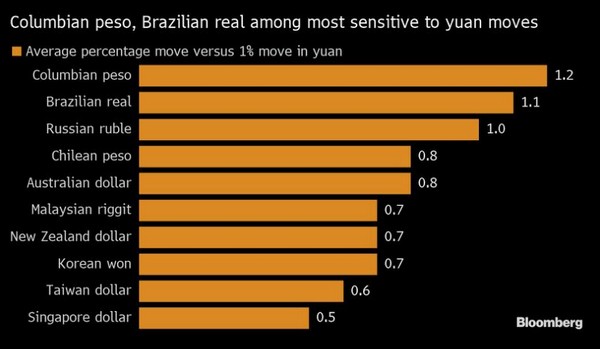 Foreign-exchange positioning suggests investors are becoming less concerned about further weakness in emerging markets. Bets on volatility fell by the most since 2011 last week as developing-nation currencies rallied the most in four years against the dollar. The yuan, often seen as an anchor for its emerging peers, has rebounded from last month’s slide to strengthen beyond its 50-day moving average for the first time since March. Risk reversals on the currency have fallen, while implied volatility gauges remain below levels seen in March.

Sensitivity to the yuan is of course a double-edged sword for emerging-market currencies, as there remains a distinct possibility US-China relations will sour again as the American presidential election nears. Only last week, the Trump administration placed new limits on Chinese airlines. Analysts at Goldman Sachs Group Inc. are among those who see further weakness in the yuan amid uncertainty over US policy. All Latin American currencies weakened on Tuesday amid a pause in the global risk rally.