The Chapainawabganj District is located in the north-western part of Bangladesh. Every year, mango growers there are hoping for a bumper yield - and potentially a bumper profit - but this time around, the Corona-virus has changed the situation. Mango growers have been suffering due to lack of transportation and buyers.

To ease their woes, the government has initiated a train service -the "Mango Special"- to transport agricultural products. The train began its journey on the route between Chapainawabganj and Dhaka yesterday at a reduced rate, said railway officials.

"We introduced the train for easing growers' problems of transporting mango this season," said Md Nasir Uddin, railway's divisional transportation officer. The rates for booking parcels for the train was reduced to highest Tk 1.30 per kg from normal rate of Tk 3 a kg. Both growers and traders can use the facility, he said. 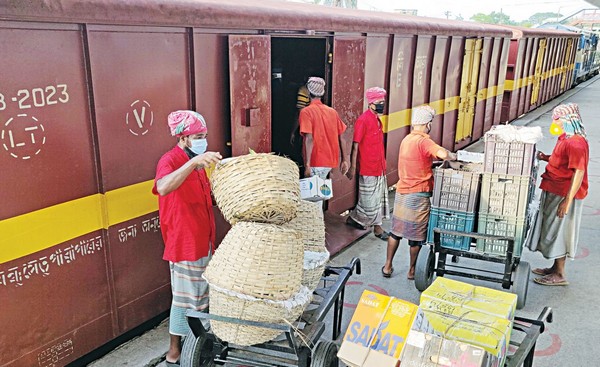 On the first day yesterday, around 1.64 tonnes of mango were booked from Chapainawabganj and six tonnes from Rajshahi, but each of the five coaches attached to the new train has the capacity of transporting at least 45 tonnes.

Appreciating the move, mango growers said this new train would reduce their sufferings, as they do not have to book at different courier services at exorbitant prices any more.

Most growers refrained from attending to their orchards this year as they were anxious about how they would market their products. Besides, the weather was not favourable this year as rain occurred during flowering and fruiting periods, hampering production. Moreover, mango trees suffered two storms this year including the cyclone Amphan that caused dropping of around 10 percent of the fruit.