US: YUMI organic black seedless watermelon to be available 3rd week of June

Around the third week of June, an organic black seedless watermelon will hit markets nationwide. While this watermelon variety has been available in local markets for a few years, this year will be the first year that it will be launched as a branded product and be distributed throughout the United States.

“It’s such a unique variety – the rind is a really dark green color, almost black. The flavor is quite unique too, it’s a very juicy variety and spectacularly sweet,” says Severance. “And it’s seedless, which is something that is popular with consumers too.” 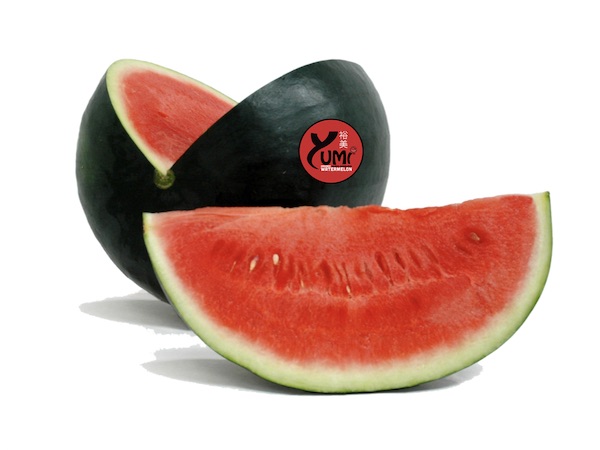 Looking back at product’s history to define the brand
The company chose YUMI as the brand for this watermelon, which is derived from the Japanese word meaning “abundant beauty”. Severance shares: “We thought this name was very fitting for this unique watermelon – we decided to highlight the product’s Japanese history because our variety is derived from a black watermelon variety from Japan. These watermelons are very coveted in Japan, and they have even been auctioned off, so the name is a nod to its history.”

The company has teamed up with a creative design artist to design beautiful display bins with high quality artwork, as well as a sticker with a new logo. “All around, the artwork and displays we will be providing help to tell the story of this unique variety, as well as help to draw in the consumers to try something new,” Severance says.

Washington and California grown
Charlie’s Produce is working with two growers in eastern Washington and one in Central California to grow the YUMI watermelon. So far, the growing season has been going great. “These regions have a very warm and dry climate, which is exactly what the watermelons like. The growing season for the YUMI, though it’s a unique variety, is very similar to that of traditional watermelons. We are expecting the harvest to begin mid-June, and have availability starting in the third week of June,” says Severance. The season is expected to run through early September.

“Charlie’s Produce has six distribution centers up and down the West Coast, including Boise. These reach all the way from Los Angeles into Anchorage. We also have a brokerage arm, Charlie’s Produce Trading Company, which allows us to go nationwide with our distribution,” Severance concludes.