Most of these kiwis went to countries in Southeast Asia. Especially at the start of the season. Exports to that region grew by ten percent. Exports to the EU remained at the same level as last year. North America took significantly less of these fruits than in 2019.

More to particularly Japan, stable export to China
Most New Zealand kiwis shipped to the EU arrive at the Belgian port, Zeebrugge. Smaller amounts go directly to Spain and Italy. Outside of the EU, Japan is the most important buyer. At the beginning of 2020, exports to that country increased by no less than 35%. That is compared to the same period last year.

Kiwi exports to China stagnated and even fell by ten percent to South Korea. Exports to the United States decreased sharply, by a quarter. Less was exported to Taiwan, Australia, and Canada too. However, India and Brazil bought a lot of kiwis from New Zealand early in the year. 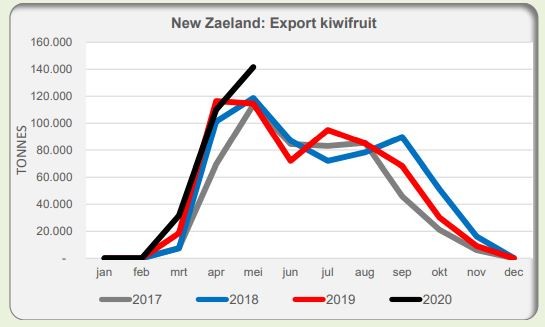