Last Thursday, the Indonesian Agriculture Ministry reported that the onion supply was estimated to exceed consumption by 5,745 tons between May and August as producing provinces experienced the harvest season.

Farmers on Sumbawa Island in West Nusa Tenggara, the country’s third-largest onion-producing province, had produced at least 1,300 tons as of Tuesday. In 2019, the island, a key onion-producing region in the province, produced around 24,100 tons, a 4.3 percent increase from a year earlier.

“I am ordering the executives of the Agriculture Ministry to work with the regional administration in order to make West Nusa Tenggara a cornerstone of the national food [supply],” Agriculture Minister Syahrul Yasin Limpo was quoted as saying in a statement on Thursday. “Therefore, the agricultural performance should improve so that the production of the province’s main commodities like onion, corn and rice will increase.” 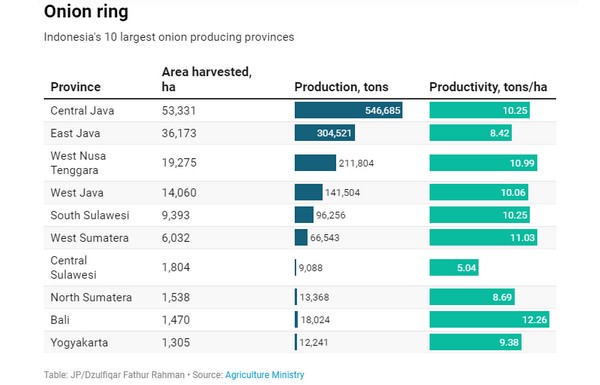 West Nusa Tenggara’s onion supply is important for the government as it seeks to stabilize prices and avoid shortages of key commodities during the coronavirus pandemic. But the unfavorable dry season may hinder efforts to stabilize production.

In late April, President Joko “Jokowi” Widodo reported that only one province faced an excess demand of onion. However, the price of onion has yet to fall to its previous level. In May, onions sold for an average of Rp 53,450 (US$3.65) per kilogram, 43.8 percent higher than the average price over the same period last year, according to the Information Center for Strategic Food Prices (PIHPS), the government’s tracker of key commodity prices.

Although the price increase might affect consumers, it was deemed helpful for farmers as it could allow them to prosper, said Indah Damayanti Putri, the regent of Bima, another key onion-producing region in the province.