The hotel and restaurant sector has been one of the most affected by the emergence of COVID-19 and the global health crisis caused by it. Fruit juicers have a significant presence in the Horeca, which has been brought to a halt for more than two months. Sales of these machines have therefore suffered a sharp drop and will take time to recover.

“The coronavirus crisis caught us all by surprise. We experienced it with great concern at the beginning, because it was something totally unexpected that gave rise to great uncertainty about what was going to happen,” says Rafael Olmos, general director of the company that manufactures Zummo juicers and president of the federation of manufacturers of machinery for hospitality in Spain, FELAC. 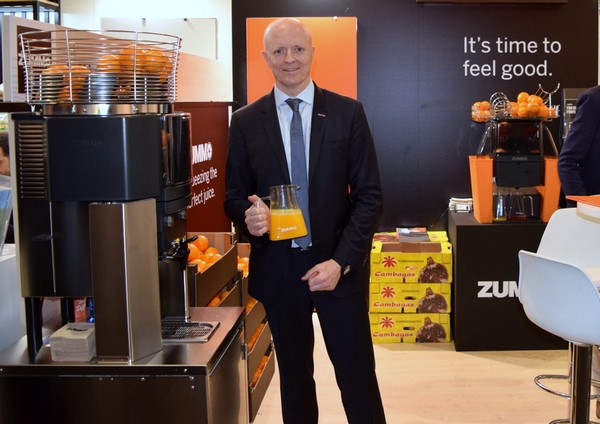 Rafael Olmos, general director of Zummo, at the latest edition of Fruit Logistica.

Zummo allocates 55% of its sales to the Horeca channel, where sales have dropped by around 90% since the start of the coronavirus crisis. The remaining 45% of the business of this Valencian company is carried out in the retail channel, where sales have fallen by around 30%. Zummo is present in more than 100 countries across five continents, with exports accounting for 80% of sales.

“Despite the fact that juicers have become increasingly present in supermarket chains in recent years, and that large retailers have exponentially increased their food sales during this crisis, juicer sales have dropped. Supermarkets were swarmed by customers during the first days of the lockdown, forcing them to set limits on the maximum number of people allowed. Some chains stopped the use of the machines simply as a precaution. That is why we have set out protocols for use and cleaning that guarantee hygiene in our machines. For some weeks now, we have been installing machines for different supermarket chains in different countries, including Spain,” says the general director of Zummo.

“The machines with the lowest sales are the models intended for the horeca channel, while the most demanded have been those that we designed for supermarkets. The Z40 model is the best-selling one, since it is the fastest, and in addition to oranges, it can also squeeze lemons, grapefruits, mandarins and pomegranates. Pomegranate juice is becoming increasingly popular, although orange juice undoubtedly remains the flagship product, especially now that our immune system needs to be stronger than ever.”

Hotels and restaurants have missed the Easter campaign, and what the summer one will bring is not yet known, since tourists will have to undergo quarantine and many governments in other countries still advise against traveling.

“There is consequently still a lot of uncertainty among our clients. The news and measures applied by the Government in Spain do not invite optimism. In fact, many hotel chains have decided not to open until the next Easter campaign, when the situation should be closer to normal, in order to avoid extra costs that could jeopardize their businesses. For our part, all we can do is support our clients and try to help them in any way we can, trying to anticipate their needs,” says Rafael Olmos.