"Seamless transition from the storage season to the early potato campaign"

While the first new potatoes are already being harvested in the northern potato areas, the Rhineland still offers the last remaining stocks of last year's harvest. But soon the Rhineland cold stores will be empty as well, predicts Stefanie de Kok (right in the picture), manager

of the Meerbusch Kartoffelhof. Because according to the current forecasts, the company will be able to grub up the first early potatoes from the Rhineland by mid-June. "There are now only the last remaining quantities. So we expect to start the early potato campaign seamlessly."

Continuous irrigation during the season
Until a few weeks ago there was quite a lot of rainfall, but now the drought is affecting the potato farmers. "We also have to irrigate our fields permanently, not only the early potatoes, but also the later varieties," Miss De Kok explains. This means the dry weather will hardly delay the growth of the tubers. "We will start the new harvest with the two early varieties Annabelle and Nandina; later, the Belana variety will be added. We also have a new variety in the test run this year, namely the 'Lipstick'. This potato has both red skin and red flesh and is expected to be harvested in July. We will then deliver the gourmet potato to some restaurateurs and regional Edeka markets."

The Meerbuscher Kartoffelhof cultivates a total of eight potato varieties on 15 hectares, including the new Lipstick variety (r). In addition to this, onions are also grown. The products are marketed directly to the regional food retailers or via the catering trade.

Market situation appears to be stabilising again
In general, the market situation for potatoes has been particularly exciting in the last 2-3 months, Miss De Kok confirms. "Because of the hamster purchases at the beginning of the Corona pandemic, we sold four to five times the quantity as usual on some days. Although the catering trade had completely disappeared due to the closure, we were able to sell much more than usual in the food retail trade. So the bottom line is that we still had a small increase in sales. In the meantime the market has stabilized to a certain extent: Last week the first restaurants in the Rhineland opened their doors again. "Now it remains to be seen how this line of business will develop in the near future." 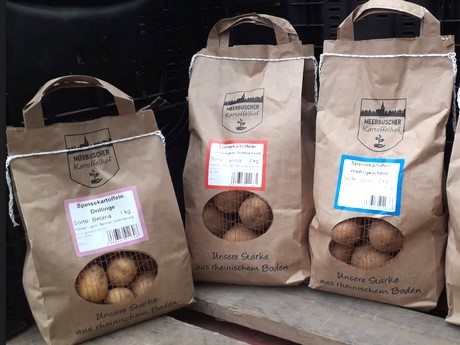 Successful conversion to paper
The Meerbuscher Kartoffelhof was established at the turn of 2018/2019, after Riccardo Bär and Stefanie de Kok took over the farm. In 2019 the first complete year of cultivation from sowing to harvest followed. From the very beginning, an important trademark of the company was the sustainable paper packaging for the fresh potatoes from its own cultivation. "We completely switched from foil to paper bags with cotton. In the beginning we were a bit hesitant, but now more and more people appreciate our paper bags."