The need for integrity systems it is becoming more and more common in the fresh produce industry, according to a leading Australian traceability and information service company.

Andrew Grant, Co-founder of Trust Provenance says a combination of different processes are used by a company to protect their products from counterfeiting and fraud; including isotopic analysis, blockchain and labelling. Working in this space for a few years, he adds that most agri-businesses have done quite well, but it is important for those supplying into countries like China to be aware of their security.

"It has become obvious to me that their ability to pivot away from Aussie to South African to Spanish is a lot higher than I thought," he said. "If you go to our supermarkets, you see a lot of great Aussie products, but over there, there is a lot of countries vying for that position. That is a factor of integrity, packaging, positioning, marketing and branding." 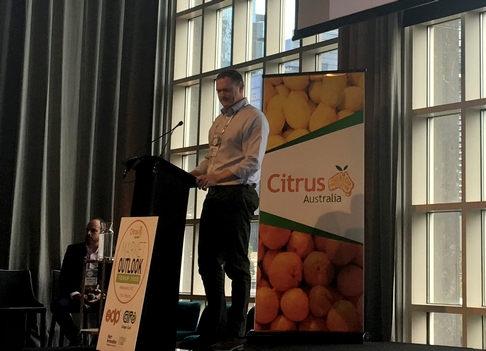 Photo: Andrew Grant at the Citrus Outlook Forum in Melbourne

Trust Provenance has built an integrity system that allows multiple real-time, digitised data points on a product to be linked into the one data platform, secured using distributed ledger cybersecurity infrastructure (blockchain) and available to supply-chain partners. Mr Grant added that consumers and retailers are driving the need for increased food integrity and safety, which is a growing factor in the Chinese market.

"Technology such as blockchain is coming along, where it is an open, scalable technology and it can be implemented at a lower price point," he said. "Our approach is to be agnostic, and we can move our platform to whatever is in the marketplace today. I think the bigger consultancy firms in the world have been running trial projects. All of that is being driven by the retailers, so the best example is Walmart; the head of food safety was against blockchain, but did a complete 180 (degree turn)."

It is not just retail companies, but Mr Grant says at a governmental level, the United Nations are also working towards global information-sharing initiatives.

"The UN has a funded project with six or seven countries around the Asian region, including Australia, are working on an inter-governmental ledger," he said. "So, those countries are getting together to work on a protocol for sharing information on the blockchain. The main takeaway from that is that the government are looking at it, the UN is looking at it - so we are going to see it is more widespread in the industry."

The Trust Provenance method operates by working with the company's own supply chain system, and the technology that already exists within it, grabbing data from the various 'touch-points' along the way in real-time as the fruit moves from one stage to another.

"We put them onto the one platform, and as that data comes in in real-time, we push that to the blockchain," Mr Grant said. "What that gives you is the ability to log into one system to see where your products are, where those touchpoints were and that allows you to go back to streamline your business operations. Part of it is about the consumer side; so, the storytelling, the provenance, the romance - but there is also a control and insurance side, whether it be customs and internally for the company's operations."

The company has been working with major Australian mango producers, Manbulloo on a major project, and will be a part of a new pilot program, encouraging better traceability in fruit supply chains, led by Citrus Australia.

A label is more than just attractive packaging
Another partner in that Citrus Australia program is Laava ID, and Commercial Director and Co-Founder Gavin Ger highlighted the demands placed upon labels.

"I like to think of the label as the platform for brand engagement," he said. "So, something that keeps marketing to them. Not only in the supermarket but when they take it home. Laava technology works effectively with one simple secure identifier you can authenticate, communicate and integrate - particularly with traceability platforms and packing systems. We work with many leading traceability platforms and packers and we compliment them, not be a competitor for them." 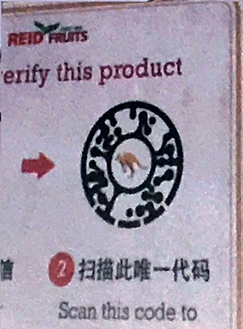 Laava Smart Fingerprints are individually unique and can be integrated with your existing print and labelling solution, making them scalable across millions of individual products. Mr Ger says there is a great need for that trust, transparency, reliability and authenticity across the fresh produce industry. Laava ID has worked with a major Australian cherry producer that was made famous when the Chinese government visited Australia, but as a result, the company has become exposed to counterfeiters.

"We can all tell fake, right?" he asked. "A QR Code that was put in with their cherry boxes in 2018/19, and unfortunately the counterfeiters copied the whole code and swapped it for one of their own. That fake QR took you to a fake website. The reason they could do that was that the codes send you straight to that website. There is nothing more intelligent in the core technology. So, in our view there was a need for a universal trust system; most systems on the market felt easy to implement but not trustworthy - or complex and trustworthy, but hard for consumers to engage with.” 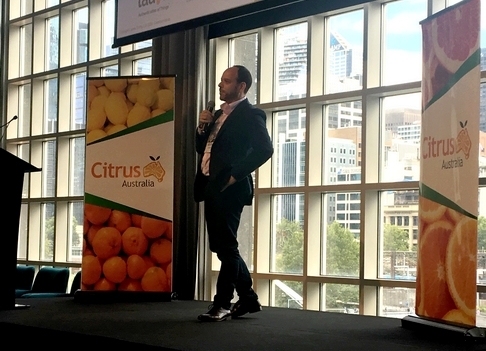 Photo: Gavin Ger at the Citrus Outlook Forum in Melbourne

But effective labelling is not only important for security and safety reasons, as customers in Asia often see premium packaging as increasing the sales revenue from a product, according to Mr Ger. He says premium products, particularly fruit, plays a major role in gifting culture and has a special status. While the sustainability of the product packaging is always growing in importance.

"There is a lot of interest in degradable and compostable packaging," Mr Ger said. "There are also some strong signals from (Chinese President) Xi Jinping that they expect a significant amount of China's packaging to be compostable and degradable. An example I found in China, was the presentation of (Australia's) Venus Citrus, which stood out very prominently against competitors that consumers could have chosen. It has a strong premium essence to it too. Some might look at it as 'so what?' but it could be the difference between someone taking home your product and someone taking home Chilean oranges or any other competitors’ product."