Herbs, sold entirely in paper instead of plastic

REWE and ECF Farmsystems are testing new forms of product packaging. The capital city basil produced in Berlin is now packed 100% plastic-free. Both the funnel-shaped plastic bag (sleeve) and the plastic pot are dispensed with. Instead, their Hauptstadt Basil will be packed exclusively in recycled paper. The customer can cut the bag along the dotted lines and the paper recycling bag becomes a substitute pot. The substitution of plastic bags saves approximately 2.1 tons of plastic per year.

In addition, the elimination of the pots saves about 5.1 tons of plastic per year. The innovation has a pilot function: If the new packaging method is accepted by the customers and proves itself in practice, its use can also be expected for other herb pots and nationwide. 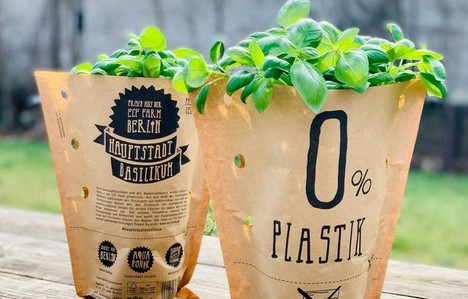 As early as 2017, REWE and ECF Farmsystems tested new ways in transport packaging. By dispensing with plastic irrigation trays for the capital's basil, six tons of plastic waste were saved annually. Building on this experience, REWE also dispensed with transport irrigation trays for other products available nationwide, thus saving 90 tonnes of plastic per year for potted herbs alone.

Raising perch and growing herbs under one roof
Since the beginning of 2017 REWE and the Berlin start-up ECF Farmsystems have been committed to a holistic and environmentally friendly process for the production of perch and basil: Aquaponics. The breeding of cichlids in the middle of Berlin is combined with the cultivation of herbs - because these are optimally fertilised by the nutrient-rich water from the fish farm. From fish food to plant fertilizer to basil and perch in the supermarket, there is a complete production cycle in the heart of the capital. At the same time, local cultivation shortens transport routes and cold chains for greater sustainability and freshness.

The capital city perch and capital city basil are available at 280 REWE stores in Berlin, Brandenburg and Mecklenburg-Western Pomerania.