'Main reason behind decreasing apple acreage is the limited profitability'

Drought conditions in MY2019/20 limited production volumes. However, the main reason behind the decreasing trend in apple planted area, and thus production, is the profitability of the crop, which is low compared to alternative crops (cherries, walnuts, hazelnuts and blueberries). 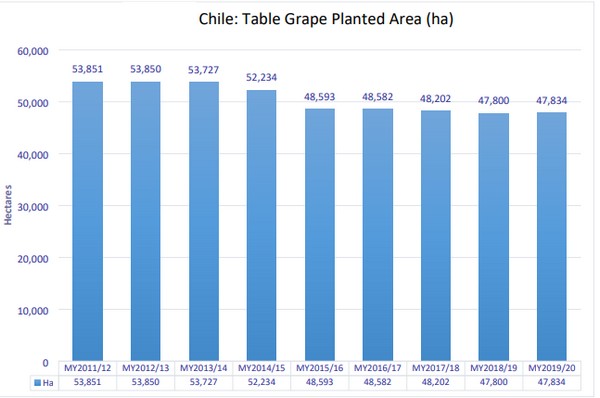 Table grapes
Chile’s table grape planted area in MY2019/20 remained unchanged and totaled 47,834 ha. Notwithstanding that Chile is going through an 11-year drought period, which has intensified in MY2019/20, table grape production remained steady and reached 835,000 MT.

Many table grape producers have access to water reservoirs. They also have adopted measures to increase their productivity, including drip irrigation systems, private water reservoirs, and the use of modern varieties that adapt well to water stress conditions.