Together with Compac, Levubu grower-packer throws out the rule-book with their packhouse design

Last year, at the end of a third season of packing avocados during 24-hour shifts (plus frequent overtime) from late January into May, six days a week, Lizelle Muller, packhouse and local marketing manager at Amondel Pakkers, singlehandedly started dismantling the packline – just in case the plans for an entirely new packhouse, already postponed once, were reconsidered.

For the past three years their packline had had to run ceaselessly during avo season to cope with growing volumes. Lizelle says that she would be at the packhouse by six o’clock on Monday morning and only knock off on Sunday morning. 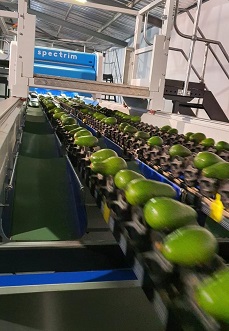 This year Amondel in Levubu, Limpopo, debuted its brandnew packhouse with high-speed Compac line with optic sorters and it has exceeded their expectations, welcome respite when the local avo market ground to a halt in March.

After three years of enormous harvests (last year when the crop was down for the rest of the country, they had their biggest ever - 430,000 4kg cartons), this season has not delivered a good crop.

They were subject to a large hail storm in November last year, drought and heat waves late last year (47°C day after day), resulting in very small sizes (a fifth of the crop was unmarketably small) and low volumes.

Fortunately they’ve had excellent rain in January and February, filling up rivers and farm dams, changing their prospects for the coming season dramatically.

30% increase in packing capacity in half the time
Amondel has ended its own export season, a stable campaign greatly helped by the exchange rate (of only Hass; their greenskins are for the local market, where at the end of March demand totally evaporated with the closure of restaurants and hotels), getting in early and getting out by 1 May.

They were greatly helped by the speed of packing this year, packing 30% more in a single day shift than they managed through extreme exertion over two shifts previously. Previously they could pack 300 bins working 24 hours at a stretch – now they do 450 bins within normal working hours, plus an hour of cleaning before, and the line wasn’t even run at capacity this season.

The British Retail Consortium-accredited packhouse also packs for a small number of other growers, similarly accredited with Global GAP and Siza. “We’re very picky who we let into our group. Our own fruit and Amondel packhouse have quite a good reputation which my father worked very hard at since we built the packhouse in 1996,” says Lizelle. “Our big thing is looking out for what’s best for our farmers.”

She remembers helping to paint the old packhouse as a child, constructed from odds and ends procured at auctions and from neighbours. The Aweta packline (the only brandnew feature in the original packhouse) had served them very well when volumes were low (20,000 cartons during their first year) but they could only put 15 bins an hour through with a minimum of 60 people. 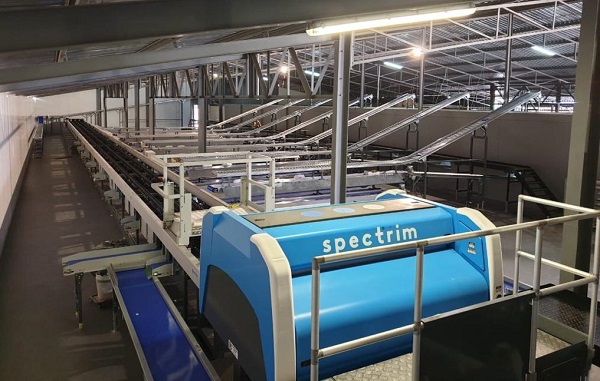 First in, first out with their own avos
Their aim has always been to exit the avo market by the first of May, before the harvests from Tzaneen and the Lowveld come in. “You already have to compete with Peru, you don’t want to have to compete with the rest of South Africa as well,” Lizelle explains.

However, over the past few years the success of their avocado expansion was becoming a rod for their own backs, and in the old packhouse their packing extended into the second week of May.
Moreover, she says, if they were still using the old packhouse under current lockdown regulations they would probably have had to close their doors for the season, unable to comply with physical distancing.

Night shift is out of the question under lockdown, even further reducing what their previous capacity would’ve been (she notes this has hampered Peru’s avo packing). As it fortuitously turned out, the layout of the new packhouse lends itself to physical distancing requirements.

Aim to pack avos for 10 months of the year
A hundred reasons, then, why a new packhouse was essential to the business, not only to handle their own crop, but also to head towards packing for ten months of the year, pulling supply from different areas plus their own guavas.

“Instead of working like crazy for three months of the year, which is difficult especially for women with children – and most of our packhouse staff are women – we can now work for, ideally, ten months of the year with normal, humane hours,” Lizelle says. “We won’t completely get there this year because of the poor crop. We’re doing a few of our late Fuertes, then a mix of Fuerte, Pinkerton, Hass, Rinton and Ryan from the top of the Soutpansberg taking us into July. Then we have farmers who’ve been planting Lamb Hass, taking us into August, then out-of-season Fuerte from the top of Soutpansberg in September. Late January we start with the out-of-season Carmens and we can pack until September.”

Upon securing a non-negotiable budget of R22 million (about 1.1 million euros currently), she set to co-designing a new packline that would fit into their limited space with Marius du Preez of Masgcor, South African Compac agent.

“It was the first time I’d ever gone through the whole process of designing and commissioning a packhouse with a woman,” Marius says, “and the level of detail that she brought to the design was illuminating. She was very hands-on. It was a real pleasure working with clients involved at every step of the way. Her marketing experience led Lizelle to taking calculated risks for the benefit of their growers.” 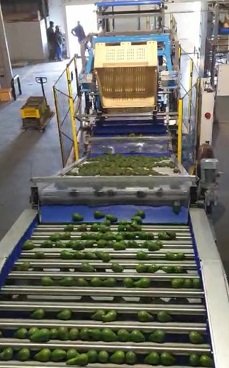 Amondel’s dedication to food safety as well as water exigencies led them to the first adoption of a drytipper (a continuous soft bin tipper; pictured right with the infeed) in the South African avocado industry.

Marius notes, coming from a citrus background, the absence in the avocado industry of a nonpartisan postharvest research body like Citrus Research International, leaving much scope for packing and postharvest innovations as the avo industry grows.

“We started off reconsidering every single step of the avocado packing process and frankly, I don’t think we’ve finished. It’s really a unique packhouse. The entire process looks different from what’s done at other avocado packhouses in the country.”

“Compac has done a great deal of work towards ensuring consistency in handling, grading and distribution of rounder-shaped as well as the longer green varieties,” he says. “The handling of greenskins has always been a challenge on high-speed sorters but Compac has managed to accommodate long fruit, like greenskins, by making modifications to how the fruit settles and rotates.”

It allows handling of the same volumes but on much smaller floor space, says Piet Muller, Lizelle’s father and a former chair of the South African Avocado Growers’ Association. “It’s the first optic avocado sorter in the Soutpansberg region. We designed the new line according to our bottlenecks, streamlining the flow of product to a great degree,” he says, adding that their automatic box fillers on the jumbles aren’t very common yet in the South African industry.

Lizelle was hoping for 40 outlets, but had to settle for 32. She’s enjoying sitting with their optic sorting software, teaching it the characteristics of the different cultivars and seasonal anomalies, for instance very longnecked Fuerte fruit this season from some orchards, due to the extreme heat.

Continuous pulp temperature management
The biggest peace of mind from the new system probably comes from the energy-efficient and remote-controlled cold room area with capacity to cool 140 pallets simultaneously, installed by their longtime collaborators Soutpansberg Verkoeling. 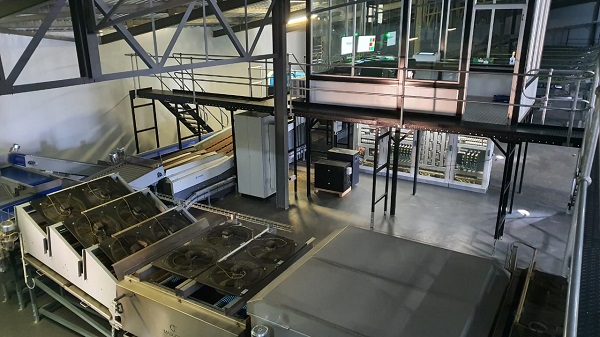 Now every fruit count goes separately through its own entrance to the pre-cooling and palletizing areas, continuously moving into the coldrooms at a quicker pace. It takes around 12 hours to reach temperature before loading out.

“We’re busy designing a system where we can continuously monitor the temperature of every pallet in the cold room. I think we’re the only packhouse in the avo industry that can do that,“ Piet says. “We manage the fruit pulp temperature instead of managing the coldroom’s temperature.”

Cloudbased, paperless functioning of packhouse system
Previously Lizelle would have to be present almost every hour of packing to anticipate bottlenecks. It was chaotic at times, she says.

Now she can keep a virtual eye over all processes, especially those in the cold rooms, the area of highest risk where an avocado grower can lose most money, she points out: a container of avocados has a value of close to a million Rand (over 50,000 euros). 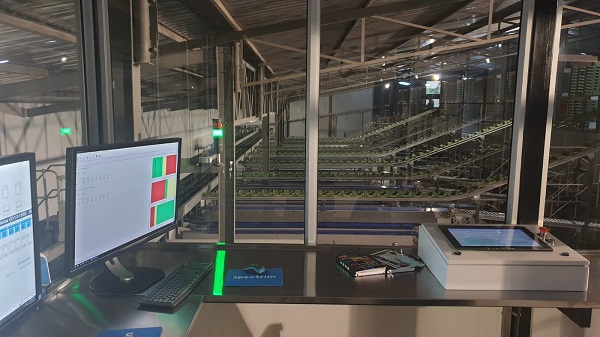 Amondel is one of the first South African packhouses running a completely paperless and cloud-based administrative system, capturing all deliveries immediately, so that a farmer receives proof of receipt even before the delivery driver is back on the farm. At any point Lizelle can inform a farmer how much of his fruit has been packed, and she has a realtime overview of the stock, the counts, and in which coldrooms.

She explains: “We dispatch according to this information and when it has been dispatched, it’s all electronically done. There is a file on the loading out computer in the cold room and they have barcode scanners, so they cannot load something that I didn’t link to the freight letter for dispatch.”

Removing the paper trail has led to smoother running of the packhouse and better efficiency, Piet adds. “Information is added at every stage of the process and there is hardly any paper flow in the process.”

It also allows off-site technicians to log in for maintenance. 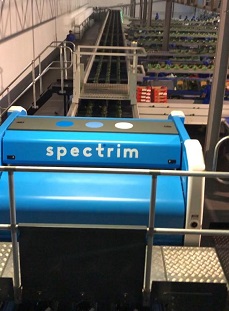 “We took big risks with this packhouse but I’m very proud of what we attained here,” Marius says. “To be involved in the avocado industry at the moment where there are many lessons to be learned, is very exciting.”

He adds that it was the collaboration between Compac, Masgcor and Nelspruit-based Telecontrols (responsible for all of the automation, instrumentation and electrical installation), as well as the client’s inputs, that made this project the great success that it is.

At Amondel the last part of their season has picked up with increased activity on the wholesale market and after some retailers had cut their orders by 50% at the start of lockdown, demand there has also improved. Most of their avocados have arrived in Europe.

“My dad laughs at me but I tell him within two years I want to pack a million cartons,” Lizelle states. “Compac took me to Chile two years ago to look at the packlines there and when I got back I told my dad: that's what I want – and now I have such a packhouse! It’s so neat and clean, it runs nearly without a sound, you’d almost think we’re not working.”