Despite lack of harvesters and closure of hospitality industry:

Enough domestic asparagus on the market so far

Despite a shortage of harvesters and less area under cultivation, there has been enough domestic asparagus on the market up to now due to the loss of catering customers. Thanks to rising temperatures, asparagus lovers can still enjoy a good supply of asparagus in May, but there are signs of a decline in the quantity of asparagus in June.

"The initially very tense harvest situation has eased somewhat with the entry regulation of the Federal Government for Eastern European harvesters. This season demands a lot from the asparagus growers. We are thankful that despite the great challenges in personnel organisation and the implementation of infection control measures, the asparagus harvest can be managed", explains Simon Schumacher, spokesman of the board of the Association of South German Asparagus and Strawberry Growers. 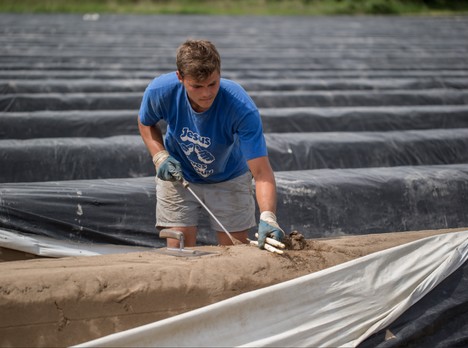 Declining asparagus volumes from June onward
The weather has played into the hands of the asparagus growers. The growth of the spears was slowed down somewhat by the cooler nights, so that the asparagus quantities were distributed quite well. "The warm temperatures now ensure more asparagus in the fields. In June, the amount of asparagus will decrease, because then more areas will have to be taken out of the harvest. So if you want to freeze asparagus, you should already think about it in the next two weeks," explains asparagus consultant Dr. Ludger Aldenhoff.

This is also confirmed by asparagus advisor Ralf Große Dankbar from the North Rhine-Westphalia Chamber of Agriculture in Münster: "Due to the mild winter temperatures, the asparagus harvest began early. Areas were and are already being taken from the harvest. Also, the late varieties are 10 days earlier this year, so that quantities will be scarcer by the end of the asparagus season."

Michael Koch, deputy division manager and asparagus market expert at Agrarmarkt Informations-Gesellschaft mbH (AMI), draws the following interim conclusion: "The loss of sales by the catering trade, which accounts for around 30 percent of total sales, has leveled off in terms of volume due to the fact that not all asparagus areas could be harvested. As a result, no less asparagus than usual was available to private households this season. Asparagus was in great demand during the week of Mother's Day and also in the week after, and has so far been the 'highlight of the season'."