In April 2020, less (-15%) fresh fruit and vegetables were imported in Norway than in April 2019. It was also less compared to April 2018 (-11%). The big difference compared to last year is partly explained by the fact that many onions were imported at the beginning of 2019, but even without onions the difference was still large (-10%).

In April almost exclusively downward trends for important import products
Products that were less imported in April this year were: bananas (-7%), apples (-30%), tomatoes (-7%), mandarins (-11%), grapes (-13%), cauliflower (-6 %) and peppers (-6%). Among the
more important products, oranges were an exception. Norwegian imports of oranges remained stable in April.

Imports from the main supplier Spain were 5% smaller in April, but the decline was even greater in a number of other countries: Costa Rica (-28%) Italy (-20%), the Netherlands (-9%), South Africa
(via the Netherlands: - 15%) and Israel (-26%). Among the major suppliers, only Ecuador (bananas) and Morocco showed a plus. 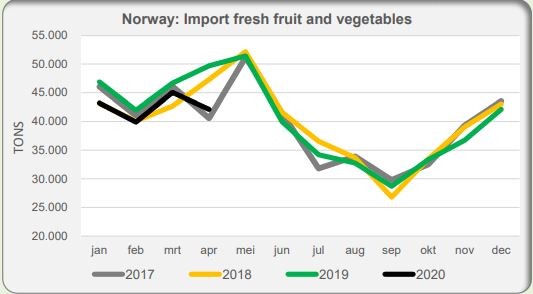 Less was imported of all the important import products during that period, but the difference was greatest for apples (-13%), pears (-19%) and especially onions (-86%). 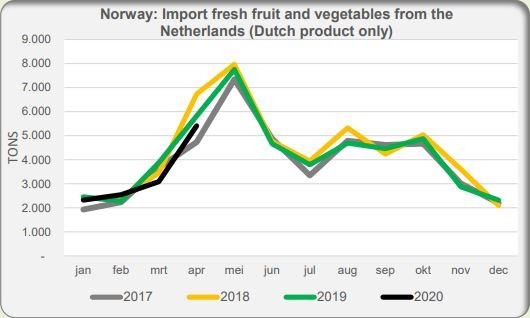 The import of Dutch tomatoes in Norway did well at the beginning of this year. This also applies to Dutch leeks.