A Queensland-based start-up company is hoping to step up trials in the coming months on its intelligent robots, which are aimed at improving fresh produce packing operations.

Co-Founder of LYRO Robotics says its machine intelligence tightly integrates 'the brain, the eyes, and the hands', enabling robots to pick and pack any item, especially delicate items such as fruit.

"We see the agriculture and horticulture space as one of the first markets to get this technology out there," Dr Leitner said. "We are looking to help farmers with robotic picking and packing solutions. This includes robots to help at the right time, in the right place. The most benefit we see in the beginning will be for farmers and packing sheds. Our technology allows for the quick deployment of robotics systems enabling these systems to not just being used in large but also in mid to small scale operations. We are looking for ways to pair our robot with existing packing stations. For example, our robot can pick up mangoes to fill up a crate. When it is finished, it can slide to another line, or pick another item like avocados. There's a lot of loss because sometimes there aren’t enough people to pick and pack, and produce can start to rot and go to waste." 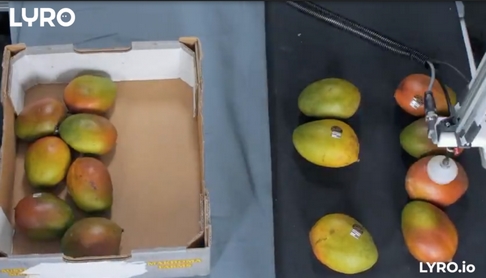 The company was launched in 2019 by Dr Leitner who has been a researcher over the last decade on robotic grasping, machine learning, and computer vision. For the last five years, he has conducted research at the Australian Research Council Centre of Excellence for Robotic Vision headquartered at the Queensland University of Technology (QUT) in Brisbane.

"What we are doing at LYRO is creating smart robotic solutions for the food and logistic supply chains," he said. "We are focusing on the connection between what we call the brain, the eyes and the hands. Computer vision system to detect the object, machine intelligence to make decisions on how to pick it, and the robotic hand to pick it up. We are good at detecting fruit in the scene, how the robot should pick it up, how it should be packed, and how to build a whole system that can do end-to-end fruit picking and packing tasks.” 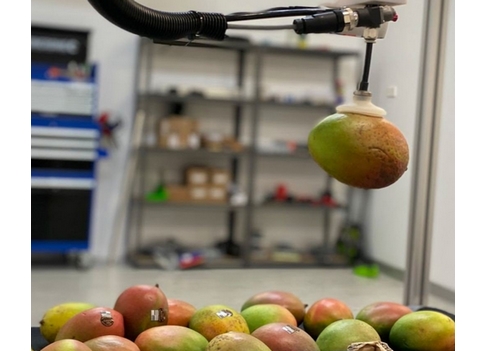 Dr Leitner adds that LYRO Robotics is focusing more on retrofitting existing robots, although it has the capability to build its own robotic system. One of those robots was a mango packer that was built from scratch.

"The simplest way to describe what we do is that the robot has a camera, which looks at the fruit to be packed," Dr Leitner said. "We have software that can work out the best way to pick up the fruit. It can make a decision on how to place it in the package. So that is an advantage that we have from other technologies out there. We can precisely place the fruit in a pattern pack. We can ensure that the fruit is orientated correctly, and add extra information. We can also sort it by blush. For example, in the mango industry, packing a tray with eg. 50 per cent blush would attract a premium in the export market. We can do that." 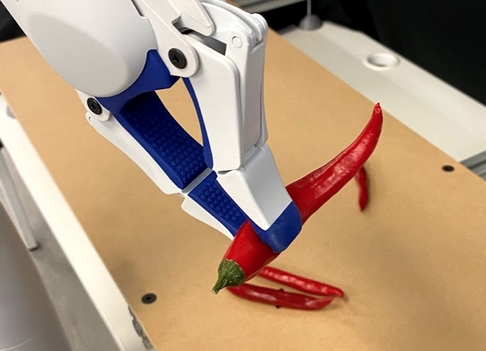 The robotic technology has been tested 'in-house' on items such as mangoes, lemons avocados, stone fruit and citrus, and LYRO Robotics has opened expressions of interest for on-site trials. While on-site trials have been delayed due to the COVID-19 restrictions, Dr Leitner says the situation has actually increased the interest from the horticulture industry.

"It is great to see these robots getting out of university labs and being used in real-world applications," he said. "People want trials to occur after the coronavirus situation becomes clearer. Some don't want equipment added to the shed right now, due to the health and safety conditions. We are looking to start the trials as soon as we can, and we are aiming to ramp up more trials in the next couple of months. We want to get early adopters and people who want to trial these technologies on their site. We are looking at Queensland, as we have contacts up here, but we are talking to people in Victoria - but we just have to work out logistics with border closures." 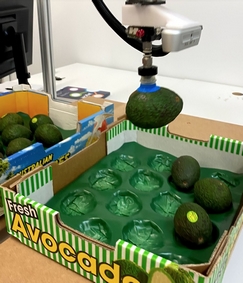 It is still early days, but Dr Leitner says all of the feedback so far has been positive, and the efficient installation is a major advantage of the robotics, compared to its competitors already on the market.

"There are specific solutions for items like apple and pear, which have had automation in the past," he said. "They are a large-scale set-up that funnels a line of apples down, so the robot can pick them. It usually involves a lot of capital expenditure and set-up time. So, people are excited by the capabilities of quickly deploying a robot on existing lines. We can also quickly change settings to different produce, collect other key visual information, what to classify in the scene, and change robot hands (‘grippers’) quickly. One of the basic limitations for current technology is that you need to redesign the machinery, and that is not always very cost-effective. We want to enter the market with something that is easy to acquire, set-up and re-deploy."

For more information (or to participate in a robotic pick and pack trial):