Following a rainy early start to the week, California cherry growers are assessing how much damage the rain has caused to its cherry crop.

At Delta Packing Co. in Lodi, CA, Nick Lucich was watching the weather as of Saturday already. “At first they said it would hit Sunday morning but then it seemed more like Sunday afternoon,” he says. “Fortunately, it didn’t hit until Sunday evening, so we were able to harvest Sunday under the threat of clouds and rain. It never really started coming in until 4:30-5:00 pm.”

When the rain did hit, it ranged from isolated showers landing on some spots to full but quick downpours in others. “Those are always kind of scary because you don’t know who’s going to get hit,” says Lucich.

Sunday evening continued to see rain through to early Monday morning which prevented any further harvesting in the Stockton and Lodi, CA areas. “But we also have cherries in Hollister and Gilroy and those were rained on as well,” says Lucich. “We aren’t harvesting over there yet. But everything that’s supposed to be harvested in the next couple of weeks is at risk of being damaged from the rain.” 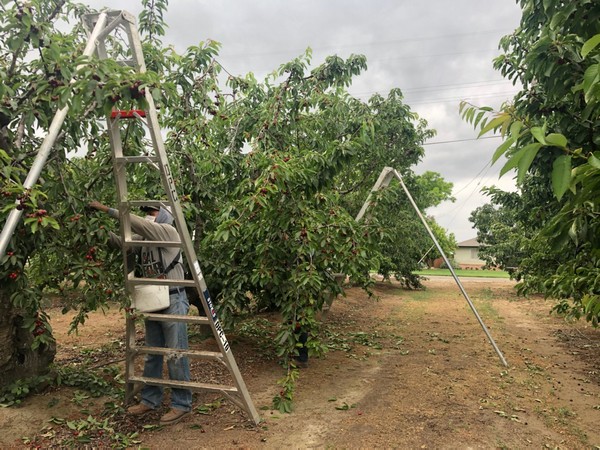 Pickers at Delta Packing Co. try to get ahead of the rain on Sunday afternoon.

Watching and waiting
Fully assessing the damage should take a few days, though Lucich says early reports from the field say the damage looks minimal. “Rain causes cracking on these cherries so that’s the main problem. You might get some softer cherries with the rain,” he says, noting that his early estimate is that 10-25 percent of the crop has been affected. “Anything that’s going to be harvested in the next couple of weeks may be more vulnerable because that’s when cherries are doing their biggest growth.”

For Delta Packing, aggressively picking cherries was how it was battling the rain. “But you can’t pick unripened cherries,” says Lucich. “You don’t want any white shoulder cherries or pink or fire-engine red ones.” Some growers, he notes, ran tractors through the orchards to blow water off the cherries, but that was only to be met with more rain.

This impact will be felt on what Lucich describes as a good, not overset crop. “This is a lighter than average crop in general, which isn’t bad,” he says. “When they’re set like this, the crop grows really big cherries in healthy orchards. But you put rain on a crop like that, it’s going to have a bigger impact on the overall percentage of what we’re going to have taken away from us.”