There was, however, a significant client shift. The year began with far more exports to Russia and the EU27 than last year. They approached the 2018 first-quarter record export levels.

At the start of the year, Turkey exported less to especially its neighboring countries. These are Syria, Iran, and Iraq. Exports to the Gulf States also decreased. Turkish fruit and vegetable exports to Southeast Asian countries are on the rise. But these are still modest.

Russia took 25%
Considering individual countries, Russia was the most importer buyer of Turkish fresh fruit and vegetables. They took more than a quarter of Turkey's total exports of these products. In the first quarter of the year, 300,000 tons were exported to Russia. If you include Belarus, this goes up to 320,000 tons. That is considerably more (36%) than in the first three months of 2019.

In previous years, Iraq was Turkey's most important client. However, exports fell to that country fell to 180,000 tons at the beginning of the year. In Q1, Ukraine was the third-largest importer, with almost 100,000 tons. In recent years, Turkish exports to Ukraine have kept increasing.

Turkish apples to India
Romania is the top (direct) EU buyer of these Turkish products. Then comes Bulgaria with Poland and Germany following far behind. Exports grew strongly (75%) in the first quarter. But that was a recovery from last year's steep dip. The EU27's share of the total was about 20%. Serbia and Georgia took fairly large amounts of fresh Turkish fruit and vegetables.

India is the only real truly distant Turkish client. Exports to that country increased this year again. But, not by much overall. Turkish exports to India concerns mainly apples. In 2020's first quarter, India even bought the most Turkish apples. Last year, many onions were (provisionally) exported, as a one-off, to India in Q4. 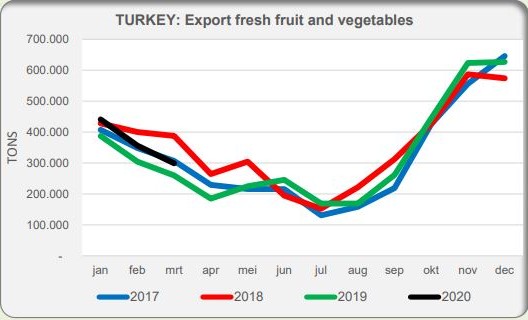 Many mandarins
Mandarins are Turkey's most important export product. That is when it comes to fresh fruit and vegetables. This is true for not only the first quarter but over the whole year. Mandarin exports reached a record level at the start of this year. Exports of the second-most-important product, tomatoes, rose by eight percent.

In contrast, Q1 lemon exports were 25% lower than last year. But more of the other citrus products - oranges and grapefruit - were exported. Generally, 40% of Turkish fruit and vegetable exports consisted of citrus products.

Turkey produces a lot of vegetables; more to Western Europe due to the dry weather?
Turkey only exports a small proportion of its total production. Annually, they grow about 20 million vegetables for the fresh market. Of this, only one million tons are sent out of the country. In other words, there are 19 million tons of fresh vegetables available for the domestic market. So, every Turkish citizen consumes about 230kg of fresh vegetables per year.

In the Netherlands and Belgium, every year, people eat about 75kg of fresh vegetables, You could, therefore, say Turkey could export significantly more than it currently does. Perhaps Turkey could fill the gap. That is if Western European vegetable crops shrink due to the dry weather.