HLB caused falling production in Florida, but production is forecast to stabilize in 2019/20

A disease affecting citrus trees hit Florida’s groves especially hard in the past decade and a half. But despite the disease’s ravages, Florida citrus production levels for the 2019/20 season are forecast to be about steady with last year (2018/19). 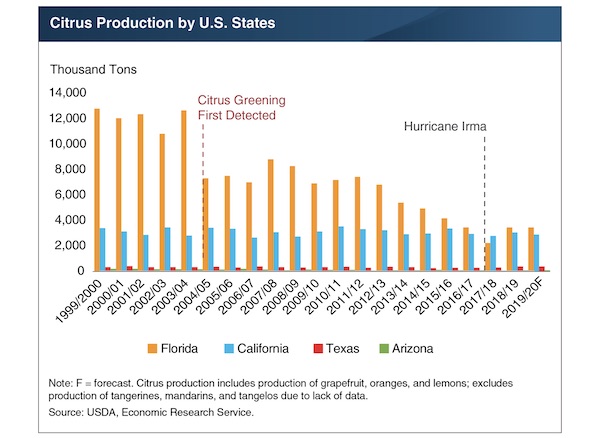 The United States is a major global citrus producer with the 2018/19 crop valued at $3.35 billion. The citrus industry is vulnerable to numerous threats, including Huanglongbing (HLB), which has attacked the industry since 2005. HLB, also known as citrus greening disease, impedes citrus trees’ ability to process nutrients, disrupts the maturation of fruit, and shortens tree life.

Although now present in every commercial citrus-producing State, including California, Arizona, and Texas, HLB has spread most rapidly through Florida, the nation’s top producer of oranges and grapefruit; it is now estimated to have infected all groves in the State.

Since HLB arrived in Florida, the State went from producing nearly 80 percent of the nation’s non-tangerine citrus fruit to less than 42 percent. Disregarding a temporary drop in production in 2017/18 caused by Hurricane Irma, production levels have been relatively stable for the last four years. This steady trend in production may suggest Florida growers are succeeding at retarding further spread of the disease and minimizing its effect on infected trees.