A New Zealand based scientific traceability company says businesses need to be aware of the risks of counterfeiting and fraud in fresh produce, as agricultural exports de-commoditise in favour of brand premium products.

"Australian (and New Zealand) agriculture continues to grow in export markets," Oritain Global Limited, Business Development Manager, Gordon Fisher said. "We are regarded as clean and green, with high-quality and food attributes that allow us to price it up to premium, and not compete on price. With the more claims that brands are making, of course, the risk of counterfeit also grows. The numbers for food fraud globally is estimated to be huge, it's a massive problem in export markets. Another interesting point is that brand origin is a major purchasing driver."

Oritain, whose name stems from the phrase 'proving origin, protecting reputations', was formed in Otago in 2008. Mr Fisher says the company's vision is to become the world's most trusted company at verifying scientific origin.

"We have grown, not just in Australia and New Zealand, but we have moved into Europe, the United Kingdom, and the United States," he said. "Why are we hearing more about the importance of traceability? Well, in short, consumers are expecting it; with food safety, quality and similar points. Really, all of those points are becoming a must for businesses wanting to sustainably into the future. In traditional traceability, which tends to rely on labelling and barcodes, and packaging; genuine traceability is lost often once the packaging is tampered with. The Oritain solution is a scientific test of the physical product itself, and cannot be replicated." 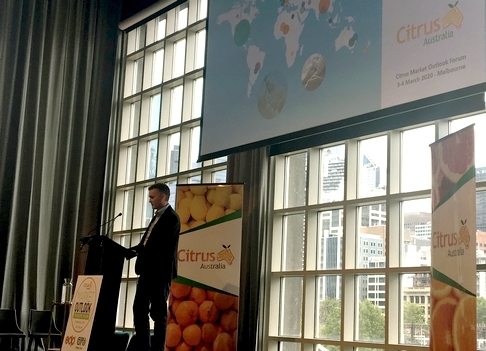 He added that the need for traceability solutions also provide the opportunity for producers to innovate and develop solutions. Oritain's methods basically compare a baseline sample collected on-farm, to what is sold at the destination market.

Mr Fisher says it then becomes insightful, as once the baseline origin is determined, then 'audit samples' are collected in the market from products that are claimed to be from the client's brand across various points in the supply chain.

"We then determine whether the samples collected match with the claimed origin or not," he said. "For example, is a navel orange actually grown in Australia? If it matches, it validates the integrity of the supply chain, however, if it does not, there is likely to be some element of fraud risk in the supply chain. We can't test every product, so we work with our client on a bespoke arrangement of where, and how often, we conduct in-market audits in the supply chain. Such an approach seems to act as a deterrent to those would-be fraudsters, and illustrate to the client the robustness of the supply chain."

However, the process does have some limits, according to the Business Development Manager, in that it does not test for individual DNA, meaning that a piece of fruit on its own cannot be tested without an original source to match it to. While in terms of organics, it cannot test whether a product is organic or not, but rather whether it was grown on an organically certified farm.

"Oritain does not claim to be a silver bullet, solving all fraud risk, in export markets," Mr Fisher said "Clearly, we know a lot of businesses have looked at things like blockchain and QR codes, or changing packaging regularly to stay ahead of the fraudsters. But due to their reliance on packaging and labelling of barcodes, there are limitations to this approach. What Oritain can do is underpin such endeavours, by adding that extra layer of scientific validation to support origin claims that appear on labels."