US: Organic produce sales up 18 percent in April

Total organic fresh produce sales continued to soar in April, increasing 18 percent from last year, and outpacing conventional produce products in both dollars and volume according to the April 2020 Organic Produce Performance Report released exclusively by the Organic Produce Network and Category Partners.

Last month saw elevated sales across the entire supermarket as restaurant closures continued to push consumers to retail stores for virtually all of their food consumption. As a result, April retail sales across the total store were up significantly compared to the same period last year, with April 2020 organic fresh produce sales topping $542.4 million. 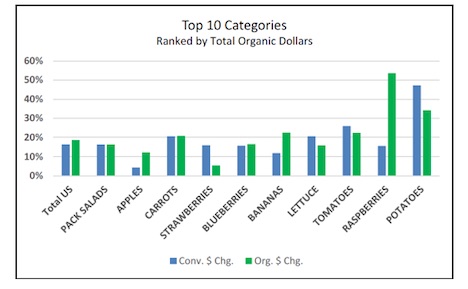 The April numbers come on the heels of March organic fresh produce sales that were up 22 percent from the previous year. For the most part, outside of sporadic shortages, the widespread out-of-stock conditions seen in produce departments nationally during March became less of a factor in April as retailers adjusted to higher consumer purchase rates. 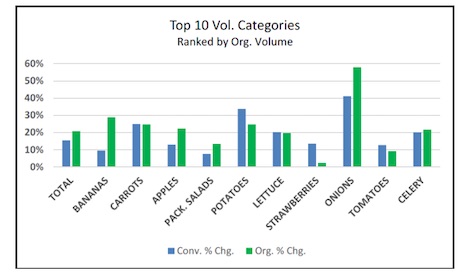 “Organic produce growth continued at a strong pace during the month of April. Sales and volume growth rates in organic produce continued to be larger than conventional, generating strong year over year dollar increases,” said Matt Seeley, CEO of the Organic Produce Network. “Despite economic challenges created by the Covid-19 quarantine, consumers show no indications of shifting purchases away from organic fruit and vegetables.”

The top 10 categories for organic volume drove 72 percent of total organic movement, with the big four ----packaged salads, carrots, apples and bananas----responsible for more than half (52 percent) of the total organic retail volume.