Before the Corona pande 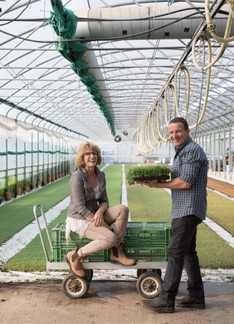 mic, cresses and micro leaves were among the most interesting trend articles in the vegetable sector. Especially in the gastronomy the unique Micro Leaves in numerous variations of increasing popularity.

But in times of Corona, the sprouted vegetables are disposed of in tons (for example at the Dutch market leader Koppert Cress), because the biggest market - the catering trade - has been almost completely stopped. Despite the current challenges, demand will soon boom again as before, believes Margret Eschbach, who together with her husband Andreas (on the right in the picture) runs the Swiss producer 2BFresh Eschbach.

The Eschbach family has been active in vegetable farming for over 30 years. The "conventional" garden cress already belonged to the crops of the classic vegetable growing business. "We have always been on the lookout for a potential niche product. After our own initial test results with Micro Leaves, we came across the company 2BFresh.com during the Fruit Logistica," Ms Eschbach says, looking back. At that time, the Israeli company was reaching the limits of its capacity: the existing production area was not sufficient to meet demand. Secondly, the European boycott of Israeli products made sales in Europe more difficult. 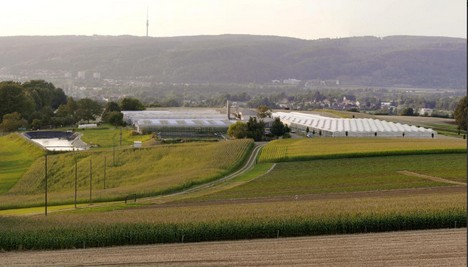 View of the company headquarters and the greenhouse facility in Füllinsdorf  Picture: 2bfresh Eschbach AG

Listed in over 500 Coop branches
This led to a so-called joint venture between Eschbach Gemüsebau and the Israeli company. In 2017 the first Micro Leaves could be harvested in the greenhouse of 2BFresh Eschbach AG. The leading Swiss retailer Coop also recognised the potential of the vegetable products right from the start. "When we presented them for the first time, people were still a little reluctant. Directly after our tasting, people were very enthusiastic about the products. Instead of in autumn, Micro Leaves was placed in the first stores as early as May 2017. From the first day on, things have been going sensational: Both we and Coop are very satisfied with the cooperation and the Micro Leaves are now listed in over 500 stores.

In the meantime, the Swiss Micro Leaves is now available in Coop stores in two varieties (30 grams each) - Aromatic (peas, rocket, sakura) and Mild (tatsoi, lamb's lettuce, golden pakchoi). The vegetables are sold in trays of three varieties each under the Betty Bossy product line. "In the beginning we expanded the range too quickly and almost lost ourselves in details. Restructuring to the 15-16 most popular varieties has worked very well so far." 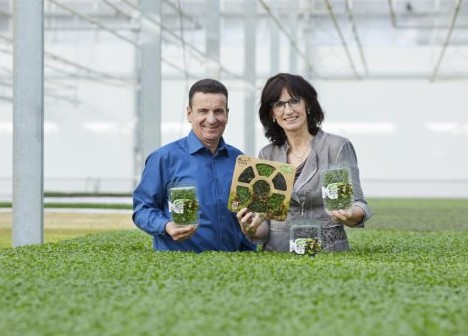 2Bfresh Eschbach AG is a joint venture with the Israeli company 2Bfresh. The regionally produced Micro Leaves from the Eschbach family are available throughout Switzerland from Coop branches and most dealers. In addition, goods are increasingly exported to Germany. Picture: Andreas and Margret Eschbach / Picture: 2bfresh Eschbach.

Elimination of the catering trade
The other part of the production is normally sent to the gastro customers, and it is precisely this sales division that has now largely come to a standstill due to the crisis. "At the moment, 50-60 percent of our normal activities in this area are suspended. From week 20, the restaurants are allowed to reopen, but only with prescribed measures. For some restaurants these measures are easier to implement, for others almost impossible", Ms Eschbach explains.

In the meantime, the innovative vegetable-growing company has set up a yard sale to deliver the surplus from the catering trade directly to the end consumer. Eschbach: "It cannot be that people buy canned ravioli while we have to dispose of the healthiest vegetables. That's why we spontaneously decided to start a weekly farm sale and the response has been amazing". 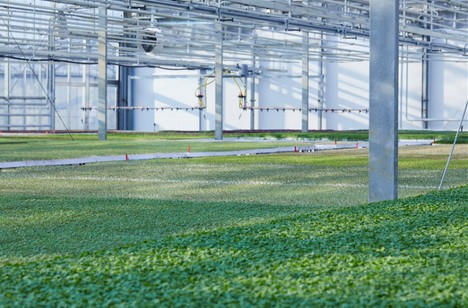 Cress as far as the eye can see. True to the slogan "It's green. It's clean. It's perfect!" the Micro Leaves are marketed throughout Switzerland Picture: 2bfresh Eschbach AG

Future capacity could be doubled
During the Corona crisis the growth of the company came to a standstill for the first time. In the long term, however, the company is considering expanding its cultivation and trade. "A doubling of the current cultivation capacity would be possible. We see further potential for growth in the catering sector in particular: that's why we usually invest a lot in marketing and actively go into the restaurants to exploit this potential. We are pleased that we have a good name among chefs and are recommended to others."