"Demand for Bavarian rhubarb and chard is booming"

Regional seasonal vegetables - such as open field lettuce, radish and kohlrabi - are traditionally very popular at this time of year in the southern German Knoblauchsland. Especially during the current crisis period, regional seasonal products are very popular with consumers. But the same applies to so-called special crops such as chard and rhubarb, says Stefan Seischab, junior manager of the vegetable company of the same name.

In the heart of the Knoblauchsland, the Seischab family cultivates around 26 hectares under the open sky. In contrast to most regional colleagues, the company's main focus is therefore on open-air cultivation instead of under glass. "We cultivate over 25 different crops, which we either deliver directly to the regional grocery store or sell at the Nuremberg wholesale market," explains Stefan Seischab, who runs the business together with his father Thomas.

'Demand for special crops above last year's level'.
In addition to a wide range of open field lettuce, the company also offers a number of special cultures from its own production. Rhubarb, for example, has been harvested in trade-relevant quantities since the beginning of April and enjoys great popularity, especially in these times of crisis. "Rhubarb is currently very much in demand, whether in food retail or with regional ex-farm marketers whom we supply with fresh produce. The same applies to the chard, which we offer in colour or as a standard variety. Sales of both special items are significantly higher than last year," the junior manager claims.

The Seischab family runs greenhouse and open-air cultivation at the same location. Mangold is generally offered from the beginning of May until well into November. Rhubarb, on the other hand, is only available for a short time, at the latest by mid-June / Picture: Seischab vegetable gardening

Further investments in special crop cultivation
In addition to the two special crops mentioned, the innovative family business is increasingly focusing on the cultivation of cut herbs. Standard crops such as parsley, dill and chives are common in the garlic country, while special crops such as mint and savory are rather rare. Seischab: "We already grow the usual types of herbs - such as chives, basil, parsley, dill and mint. We have now also received further enquiries - for thyme, for example." 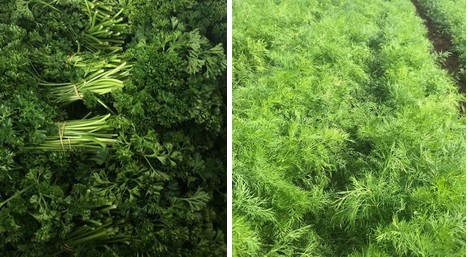 The year-round supply of regional herbs is part of Seischab's ambitious multi-year strategy.

In this sense, 2020 is a trial year for the family of growers, because for the first time the herbs are being produced both in the open air and in the greenhouse. The aim is to offer regional herbs to the trade all year round. "At present, we only produce basil in the greenhouse, as this crop is thermophilic. In addition, we have not yet had any cut herbs in the greenhouse this winter, but this is planned to happen the following winter."