According to a study carried out by the Unió de Llauradors (Farmer's Union) on the onion and potato campaigns in the production areas of the Valencian Community, producers have lost more than 27 million euro (almost 19 million euro in the regions of Valencia, 7.1 in Alicante, and 2.4 in Castellon). 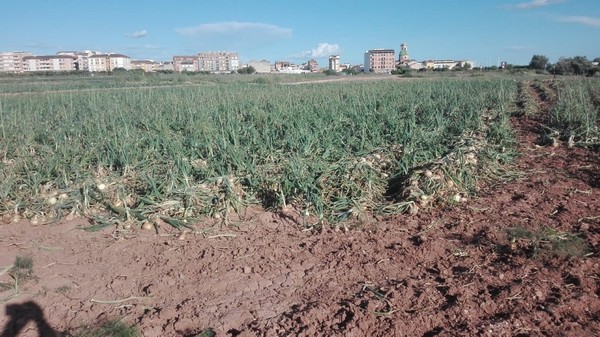 This year, onion and potato producers are being paid dirt cheap prices for their crops. As a result, many crops have either been destroyed or lost due to a lack of buyers. The onion is hardly being harvesting now. The large-caliber is priceless and the medium and good calibers are being quoted at a maximum of € 0.10 to € 0.13/kg (VAT included) in the field. This is more than 50% lower than in the same week of last year. Meanwhile, potato prices have steadily fallen and they don't exceed € 0.17/kg. The downward trend has continued as the days go by and prices are 60% lower than in the same week of last season.

This is a stark contrast when compared to the increase in the price paid by consumers, as they can pay up to 1,120% and 900% more for their onions and potatoes, respectively, than what producers are paid, as La Unió has been able to verify. In addition, as the onion campaign is more advanced, supermarkets still have a lot of onions from New Zealand, Peru, and the Netherlands; something that could happen with the potato, although they could bet on the national production. It should be noted that many companies that supply these products import them on a massive scale. Then, they store the product and don't buy the national onions or potatoes until they have sold what they have stored, or pressure producers so that prices go down.

Nearly 70% of the potato produced in the Valencian Community is of early varieties and 95% of the onion is of the grano variety and the remaining are spring onions. Both crops have been greatly affected by the Covid-19 health crisis, as exports have dropped due to movement restrictions, and the Horeca and local markets, which have been negatively affected by the crisis, are some of their main marketing channels. The only establishments that have increased sales are the supermarket chains that buy from large national or European distributors, which is why consumers can see so much production from abroad on the supermarket shelves.

The European Union has adopted measures to stabilize the potato market, but only for the potato for the industry, which doesn't include the one grown in the Valencian Community, as it is mainly intended for fresh consumption.

The average potato production in the Valencian Community during the last fifteen years stands at about 65,000 tons cultivated on just over 2,200 hectares. Meanwhile, the average onion production stands at about 67,300 tons cultivated in nearly 2,200 hectares. The most important potato producing areas are those of l'Horta (37%), Vega Baja (19%), Vinalopo (12%), Ribera Baixa (7%), and Baix Maestrat (6%); while the most important onion producing areas are l'Horta (47%), Vega Baja (13%), and Baix Maestrat (13%).