In the first three months of this year, French imports of fresh fruit and vegetables were 5% smaller than in those same months last year. The trend was roughly the same in all three months. Also it was less compared to the years before; 2018 -2% and 2017 -5%.

Total French imports of tomatoes, pears and carrots showed a normal picture. In addition to the Netherlands, less onions were imported from other countries. 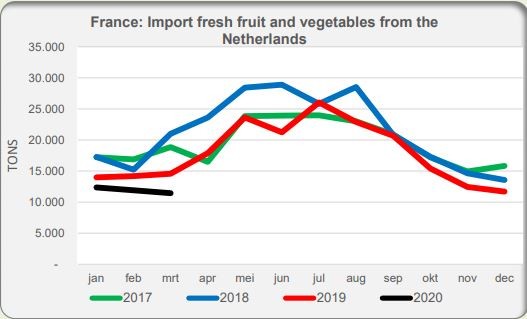 Dutch exports to France: two thirds re-exports
With regard to total French imports, the picture for large products in the first quarter was not exceptional. Exceptions were: avocados -7%, pineapples -13%, apples -42% (!) And strawberries -11%. In addition to the Netherlands, much less was also imported from Costa Rica (pineapple) in the first quarter. 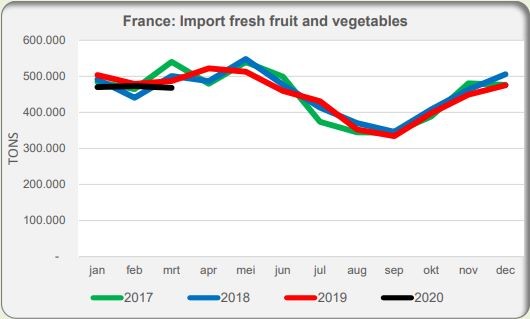 Apples were the most important product. Although more than 10% more imports were made in the first quarter compared to last year, the previous years were even higher.

Less to Spain and Italy; more to the Netherlands and Belgium
Customers noticed that in the first quarter less was delivered to the southern neighbouring countries of Spain and Italy. On the other hand, exports to Portugal did grow considerably (67%). More went to the main customer Germany (5%). Exports to EU dropouts in the United Kingdom remained stable and exports to the Netherlands were slightly (4%) higher. Export to Belgium grew very strongly, by almost 30%.