"In 2019, the Netherlands imported more bananas than Belgium for the first time in a long time"

The global banana trade market has generally been stable in recent years. In the past three years, a net amount of about 21 million tons of bananas were traded internationally. This includes plantains but excludes re-exports. That still indicates a gradual growth. At around the turn of the century, this still amounted to 12 million tons. Ten years ago, it was roughly 16 million tons.

1 to 1.5 million tons of plantains
The figures in this article relate to trade, which includes that of between one and 1,5 million tons of plantains worldwide. The most important plantain exporters are Guatemala and Ecuador. Last year, both these countries sent approximately 230,000 tons to mainly the United States. The Dominican Republic is the third largest plantain exporter. In 2019, it exported 220,000 tons of this product. That, however, went mainly to Europe. 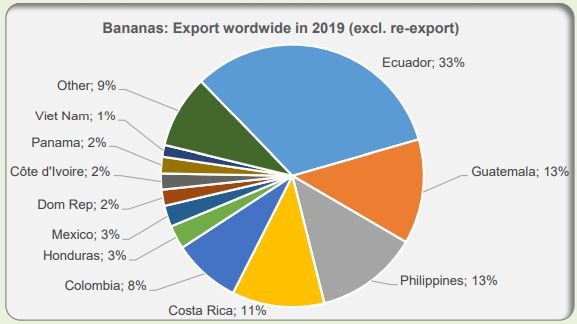 Together, these countries are good for nearly 80% of the total worldwide banana trade. Of these last four countries, exports from Guatemala kept growing until last year. Exports from the Philippines has been fluctuating for years without increasing or declining. Costa Rican and Colombian exports reached a peak in 2017. After that, they decreased somewhat. 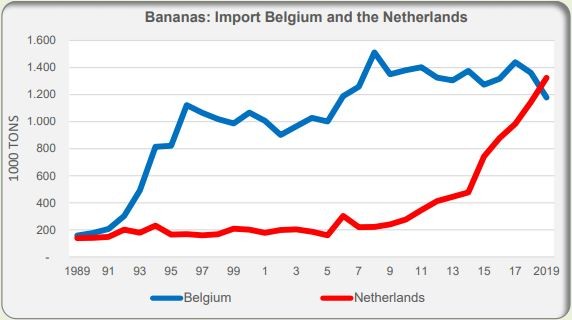 The Netherlands and Belgium are big re-exporters
Three real re-exporting countries follow these five big exporters. These are the Netherlands, Belgium, and the USA. They are followed by five other 'real' export countries - Honduras, Mexico, the Dominican Republic, the Ivory Coast, and Panama. Together, these countries export between 430,000 and 550,000 tons of bananas. The exports of all five of these countries have not increased for several years.

EU imports stable since 2017; share is almost 30%
The United States is considered the top sales market. In 2017, imports reached a peak of 5,2 million tons. They then decreased a little. The European Union, as a whole, imports around 6 million net tons of bananas a year. This has remained about the same for the last three years. After the EU and US, South-East Asia is the third-largest banana import region. 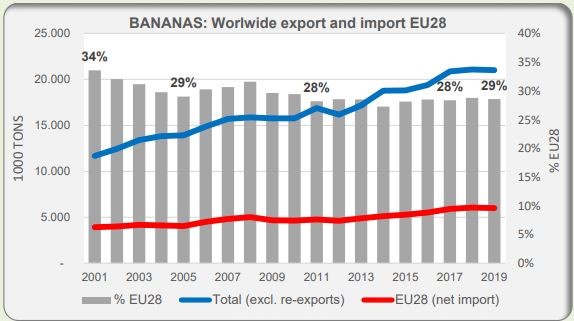 Former European Union member, the United Kingdom, also imports a lot of bananas. Last year, it was more than a million tons. Outside of the EU, besides the US and China, Japan is also a are large banana sales market. In 2019, it, too, imported approximately a million tons of bananas. Canada follows the EU countries, Italy and France. Then it is Poland, Argentina, and Spain. These, in turn, are followed by South Korea, Chile, the United Arab Emirates, Saudi Arabia, Greece, and Romania. 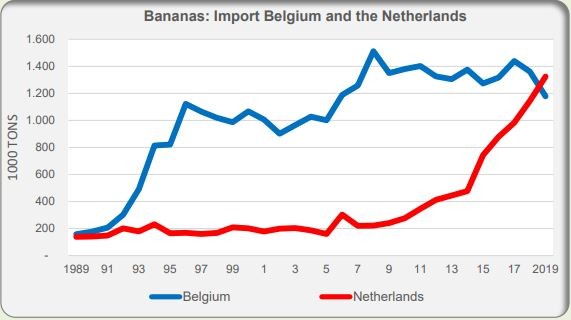