Including an in-depth look at the potato processing market

'The chipping market state of play'

'Last week saw the release of our end-March stocks estimates. Fresh bags and chipping stocks that remain in grower ownership at the end of March were estimated at 157.3Kt. This shows a 49% drawdown from end of January, suggesting 151.6Kt moved from grower ownership in that time.

The movement out of stores from January to March in percentage terms was around the 5-year average for this sector. However in actual tonnage terms, was down 12.2Kt versus the 5-year average Jan-Mar drawdown. Despite movement following usual trends it is important to note that the closure of almost all fish and chip shops came towards the end of March.

By the end of March approximately 79% of fresh bag and chipping material had left grower ownership which is 2% lower than the 5-year average. However the question faced is; what will happen to the remaining 21% if fish and chip trade remains subdued?

Market situation since then
On 23rd March the Government tightened the restrictions and enforced the rule that all non-essential premises must close. Although takeaway and delivery services could remain in operation, many fish and chips shops were unable to continue operating whilst adhering social distancing rules.

The majority of fish and chip shops were forced to close their doors while they worked out a system that could follow government rules whilst remaining to trade. As a result, sales of bagged potatoes for the chipping market ceased almost completely.

Since then there has been nationwide reopening of shops with an estimated 60% of fish and chip shops now trading again in some form. However, this does not mean that over half of normal chipping trade has resumed. Those still offering services are at limited capacity - able to only offer a pre-order service and/or limiting customer numbers in collection

It has been suggested that many shops currently operating are only doing so at 50% capacity. So not only is there a drop in outlets but a drop in requirements from the remaining outlets too. This will have a continued effect on the market through to the end of the season and a potential knock on for next season too.

Forward looking
From conversations across the industry we know that throughout April the bulk of chipping trade was non-existent for many. Using average monthly drawdown rates throughout the season and a 90% drop in trade in April, end-April stocks could be as high as 151.2Kt.

There is hope that restrictions could be eased a little and there could be a further increase in shops opening and general public visiting such outlets. If May and June were to continue to see an upward trend in the chipping trade we could estimate a best case scenario of a 55% drop from average monthly drawdown. This would potentially leave the end of season (end-June) stocks at over 95Kt.

In July, we could also start to see some early chipping material from 2020 harvest entering the market which will add further pressure.

Due to the timing of the coronavirus outbreak reaching the UK, realistically it was too late for most farmers to alter planting conditions. Commitments to land rental agreements and inputs had already been made.

Based on discussions in recent weeks, it seems, that despite a potentially reduced demand outlook for the medium term, plantings have continued mostly as planned. If we say the area may drop back to 2018 levels, which would allow a cutback of 4% for bags/chipping, we could see the planted area at 18.5Kha. If this were the case and average yields were reached we could face production of 797.2Kt of material for the 25kg bag market (ware and chipping). This combined with the potential surplus from this season of 95.0Kt leaves a total amount in excess of 890Kt.

There are several things to consider here though. We currently don’t know what the planted area for 2020 is and we could have seen a larger drop as a reaction to the situation from March onwards. It is also difficult, this early into the season to predict what sort of yield potential there is. The final thing to think about is the likelihood of the carry over lasting. Lifting in 2019 (and into 2020) was under difficult conditions resulting in some crops not storing well long-term and therefore may not be viable to use into next season.

Pricing effect
Throughout most of the season so far there has been a relatively large spread in prices for chipping material in the east. Top quality material with consistent good fry colour stayed firm from end-November through to the widespread closure of chip shops. Lower quality material had more price movement throughout the same time but the spread remained large.

At the end of March, when chip shops closed, we saw the chipping market crash out. For many growers, a price was not available as they were just unable to sell anything. Although this still remains the case for some there has been increased movement of ex-farm free-buy material in recent weeks.

We have seen prices drop from pre-lockdown levels as a result in the lacking demand. The spread in prices has however, continued with a large range in prices primarily based on quality. With the return of chipping trade slow, it is likely that prices will remain under pressure for this sector for the remainder of the season and most likely into next too. 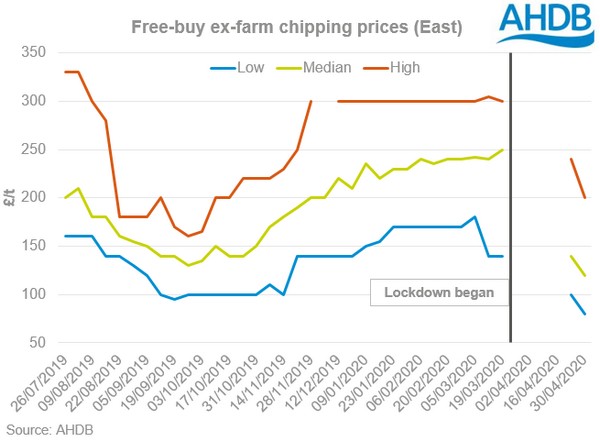 There are several things to keep an eye out that can alter the supply and demand picture in the coming months:

An in-depth look at the processing market

Processing stocks at the end of March
The release of the end-March stocks estimate enabled our industry to get a better handle on the potential implications of the temporary closure of the food service industry. For processing markets, coronavirus has affected factory output and reduced demand both domestically, and on the continent.

‘Processing and other ware stocks’ held in grower stores are estimated at 417.2Kt, 27% above the same point last year. A 36% drawdown is seen from the end of January, highlighting 238.9Kt had moved from grower stores since then. An estimated 24% of the total processing and other ware stocks is still in growers stores as of end-March. It is worth mentioning, the estimate was impacted by the closure of schools on 18 March and food service outlets on 23 March.

What’s happened in April?
Over the course of the lockdown so far, processors have reportedly operated a lower output with reduced labour in accordance with social distancing guidelines. Many have opted to close certain product lines to reduce workloads. Processor held stocks and contracted movement has made up the bulk of the processing sector trade for April. The lack of free-buy trade has translated to a build-up in supply available. There has also been reports of difficulties sourcing product packaging, which has affected overall output.

In April, we saw an increase in the volume of ‘typically processing’ material going to pre-pack markets. This affected the lower end of the market, and pulled median prices down. It is likely this movement will continue, however the quality requirement of packing markets can be an obstacle for the processing supply available.

The closure of schools and food service outlets has reduced peeling trade to minimal levels. This will likely continue for the short to medium-term as lockdown measures remain.

Since the lockdown, consumers have looked to secure non-perishable foodstuffs to minimise trips from home. Frozen potato product volumes have consistently been above last year since the start of March. Total spend on frozen potato products reached a high of 69.7% above last year in the week leading up to the lockdown announcement on 23 March. This equated to an actual spend of £24.2m in the week ending 22 March.

Since then, spend on frozen potato products in retail has trended between 12 – 31% higher year-on-year, up to week ending 26 April.

We estimate the retail-processing sector, from April to June will see a 5.8% uplift. The growth shown in the Kantar data for April plays a considerable part in this estimate.

Whilst we do not know how long the lockdown will continue for, we forecast a staggered slow return for demand in food service albeit not back to normal levels.

From end-March through to end-June, we estimate an average drop in demand of 68% for the food service sector (with demand gradually increasing from April to June).

Based on these assumptions we could see demand for processed products sitting around the 540.0Kt mark. Considering the end-March stocks figure this could sound good news. However, it is key to note that the end-March stocks reflects only grower held material. Therefore does not include anything that is either owned by the processors, already processed products or anything that is imported.

We are anticipating a loss of processing demand of around 182.9Kt for the 2019/20 season as a result of the coronavirus outbreak. Consequently we could see a large carry-over of processing material into next season. However, some material may not hold its quality through to next season due to the difficult conditions many crops were lifted in.

Export markets are unlikely to provide a solution as the large supplies available on the continent will likely bring supply pressure.

European situation
In Belgium, the closure of the food service industry has led to an estimated 750.0Kt of potatoes awaiting its re-opening. In the Netherlands, the government will pay a €50.0/t flat price for potatoes to move into starch, animal feed or ethanol markets. This is an attempt to reduce the estimated 1.0Mt supply available. The scheme will not pay out however, if the supplies are exported for processing purposes.

The decline in processing demand has affected the European processing futures contracts too. The June-20 contract has declined €125.0/t since the start of March to be at €28.0/t on 5 May. The April-21 contract highlights better stability, but is still down €45.0/t to close May 5 at €103.0/t. A belief of a reduced processing area across the big four (Belgium, France, Germany and Netherlands) could provide support for the long-term. 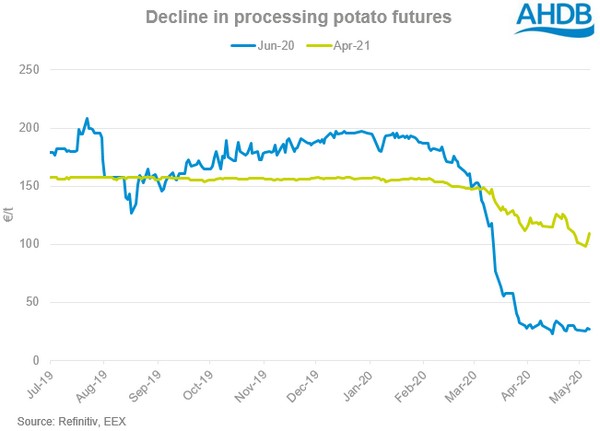 In closing
Looking ahead, we have already seen some food service outlets begin to trial opening again with a small number of restaurants. These trials will likely be increased as other restaurants join in over the course of the month, with demand picking up into June. If the lockdown is eased next week, demand may begin to slowly return to ‘historic levels’ over the next few months. However, the cancellation of many gatherings and events nationwide over the summer months will also affect demand.

In summary, there are a number of factors to be aware of that can alter the supply and demand picture in the coming weeks and months: