"The time is right to strike there, as our volumes build up"

With the industry in an expansion phase, Citrus Australia is encouraging growers to think about building relationships in the Indian market, to help manage increasing volumes in the coming years.

CEO Nathan Hancock, admits that it is at least a 5-10 year strategy that is required, but destinations need to be found for not only premium quality fruit but also second grade and composites.

"(As industry leader) I cannot make a sacrifice that individual businesses are going to have to make in terms of thinking about their long-term strategy," he said. "I think that they are going to have to accept a slightly lower price - it doesn't have to be right back to second or third-grade prices - but just needs to be slightly off what China has been paying, simply to build a relationship. I think you can then build that price north. There is definitely opportunity for tapping into a market for people who want to buy safe and healthy food, but I don't think that we have looked at India in that way, rather it's a market where we push fruit when we need to." 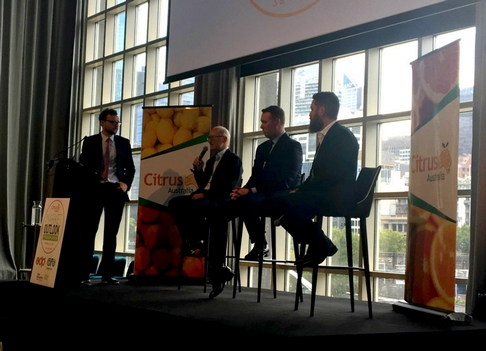 He added that there was especially promising potential for lemons and mandarins, given some of the hurdles that stopped sales in other markets do not provide a major problem in India.

"They seem to be quite accepting of these varieties, and Australian growers actually have traded volumes this year and there have been some successes there," Mr Hancock said. "But it is just a matter of backing that up and continuing to build it. Individually the marketers suggested they were happy to try some pallets in with the navels and were willing to give it a go - in fact, there were some full containers of Afourers being sent this year to test the market. So, the time is right to strike there, as our volumes build up. I am sure we are going to have a larger Afourer crop this year - it's time to be matching that with more sales into that market."

Citrus Australia has realised that there is a great opportunity to supply some of the increasing mandarin volumes among the younger Indian consumers, through the different channels.

"We have spoken to importers to see if they have tried Afourers or Murcotts to see what their position was, knowing that we have some issues getting purchase in China, for instance," Mr Hancock said. "But seemed quite interested and had no issues with the tightness of skin or any concerns with seeds, and the flavour profile is not a problem, as complex taste seems more common than just the sweetness." 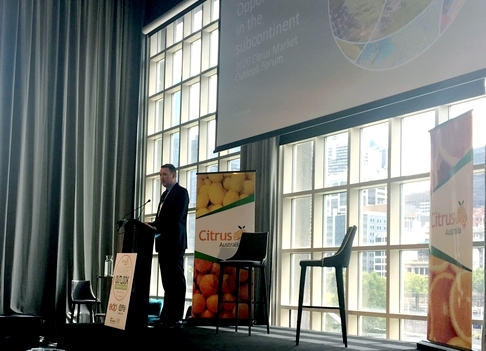 Photo: Sam Munsie from Department of Agriculture, Water and the Environment

Founder and Managing Director of BGP International, Neil Barker believes that India is a mandarin market more than an orange market for Australian citrus. He says there is small window to supply fruit into the country from July to late September, although there is some competition from South Africa, Egypt and early domestic production.

"Last year we had just short of 8,000 tonnes of Australian citrus sold in India, compared to the previous year, which was just short of 3,000 tonnes sold," he said. "It is extremely variable in terms of the volumes of fruit is left in the market in early June from Egypt, the volume of fruit that South Africa wants to start with and volume coming off domestic production. Last year we got a 'free kick'; there was not much Egyptian, and not much South African fruit - so the market was short in early June. All of a sudden Australia becomes an attractive proposition."

But he warned that the Indian market currently does not like the Navel variety, compared to Valencia, due to the ability of importers to maintain cold storage life along the supply chain.

"Traditional Indian importers think that Navels are subject to too much decay, and therefore would far sooner handle a Valencia," Mr Barker said. "We have good Navels, when the other offering to the market is Valencia; old season from Egypt and new season from South Africa. Therein lies the opportunity for us to get that Navel orange to the consumer. If we can put a good foot forward and saying we have Navels and our Navels are the best, no-one can compete - then we have our marketing opportunity." 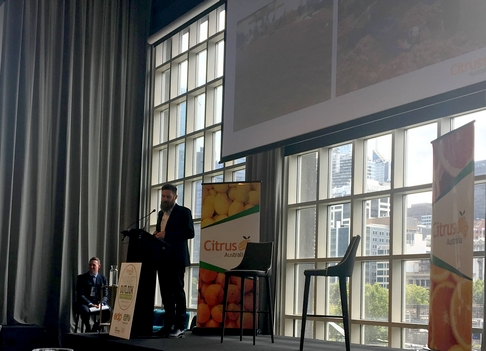 Mr Hancock says the industry is working on addressing those issues, particularly education over the breakdown of the variety - not just for traders but consumers.

"Frighteningly, the feedback we received was that consumers didn't trust refrigeration," he said. "They thought if it needs to be refrigerated, there must be something wrong with it. That's in general, not just citrus. It is something that they are working on internally themselves. One of the big retail companies is going to invest in small cold displays to put into as many small stores to market the fruit in those places. But I remember that one of the first discussions I had over there was on the breakdown of Navels. There is often some business to business work we have to do to improve their knowledge."

The Citrus Australia CEO also has recognised the potential to build relationships by working with companies such as Adani, which is investing in horticulture, to not only supply fruit but to partner with local growers to help build knowledge with Indian growers.

While, the Department of Agriculture, Water and the Environment's Assistant Director of Trade and Market Access Sam Munsie says the Indian Government often sees imports as a threat to the local industry, which the Australian government is trying to address.

"The thing that keeps coming back to us is the sheer scale, a small niche in India can suck up huge amounts of Australian production," he said. "While it will take a bit of work to get that niche, it doesn't need to be big on the Indian side of things. But we have this reputation of being a major agricultural exporter. So, it is all about massaging that, as we did with China, to say while it means a lot to our exports, the production is tiny compared with what is consumed."